Inching toward Otago’s 150th one post at a time

Last October we told you about historian Ali Clarke who is researching and writing a book about the history of the University over its first 150 years. Since May of last year, she has been chronicling her findings and gaining valuable public input toward the project on her blog, University of Otago 1869-2019 ~ writing a history. In an earlier interview with Bulletin Board, Dr Clarke said she hoped “to spark interest in the project by sharing interesting snippets” on her blog. It seems she’s successfully grabbed the interest of many readers already. Today, we bring you a re-post of The best prank?  – her most popular post to date. 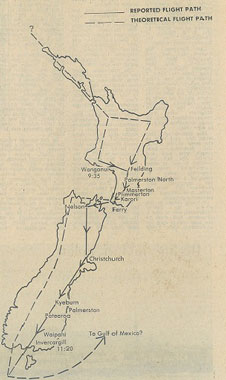 There have been a fair few imaginative Otago student pranks, but the cleverest I’ve heard of so far is undoubtedly the “grand interplanetary hoax” of 1952. According to the handout given to participants, this scheme was “designed to cure the ODT of flying saucerites and inoculate that worthy journal with a healthy degree of septicism” (typos as in the original). The local daily had been irritating the instigators – all residents of Knox College – who bewailed its trivialisation of major world events and preoccupation with UFOs.

They came up with a detailed flight plan for two saucers which would fly over New Zealand at supersonic speeds from north to south on the night of 6 December. There were some pretty good brains behind the hoax. They included future professors of medicine (John Scott and Ian McDonald), a professor of statistics (Ross Leadbetter) and lecturers of education (Russell Cowie and Ken Nichol), among others. The students involved had by that date finished their last exams and scattered home all over New Zealand. They wrote or phoned their local newspapers to report sightings, detailing times, shapes, colours and sounds, and inventing wives, children and friends to corroborate their evidence. Their assumed names and addresses were never fully checked by reporters.

Reports appeared in local newspapers all over New Zealand and the Press Association wired them around the country. The ODT – which took the reports most seriously – sought some expert analysis from astronomers who commented that if the sightings were “not the result of collaboration (and they appear to be genuine, independent observations), then they constitute a surprising weight of evidence in favour of the supposition that some object did pass down the South Island at about 11 o’clock that night.”

The hoaxers were rather startled by the success of their stunt, which they kept quiet for many years. Eventually, though, some were uneasy that their reports were still being taken seriously by some people. By a remarkable coincidence, on the night of 6 December 1952 a United States Air Force bomber flying over the Gulf of Mexico saw some unidentified flying objects, and this seemed to corroborate the New Zealand reports.

In 1978 writer and researcher Brian Mackrell, who had kept clippings of the reports as a child, wrote an article about them for the Christchurch Press. Entitled “The night of the hissing discs”, this linked the New Zealand reports with the Gulf of Mexico sightings and even included a map of the supposed flight path. Mackrell wondered whether this might have been “an elaborately contrived hoax,” but the sober and detailed descriptions extracted from the published reports of supposed witnesses from all over New Zealand must have convinced many of his readers that alien forces had indeed flown over the country. Soon the Press published a follow-up article in which Ken Nichol, a lecturer at Christchurch Teachers’ College, revealed the hoax. The story also appeared in a 1994 article by Sir John Scott for the New Zealand Skeptics journal and in a 2002 television documentary. Some Press readers refused to believe Nichol’s claim that this was a hoax, and no doubt there are still believers out there.

Re-posted with permission from University of Otago 1869-2019 ~ writing a history.