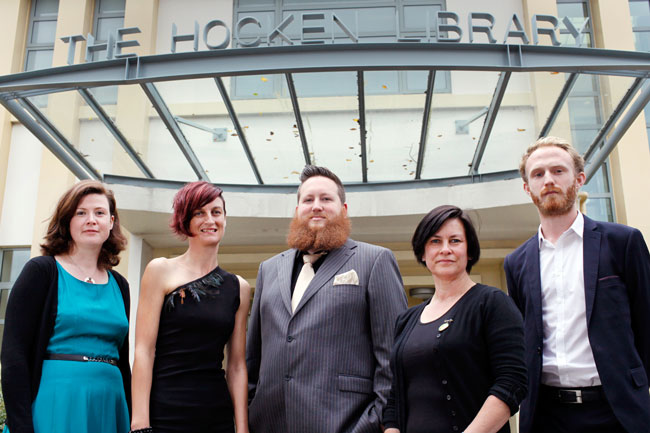 The arrival of the University of Otago’s five 2014 Arts Fellows was celebrated at a ceremony in the Hocken Library yesterday (17 March).

The recipients of the esteemed fellowships were welcomed to the University by Vice-Chancellor Harlene Hayne. She emphasised the extremely important role artists, composers, writers and dancers play in the community, as they “offer us visions that we cannot make on our own”.

Mozart Fellow Jeremy Mayall’s compositions and performances include classical, jazz, blues, hip hop, funk, electronica styles, and more. He has scored music for a number of films and documentaries. He won first place in the Electroacoustic/Multimedia section of the 2012 Lilburn Composition Competition for ‘Tracking Forward’ for viola, electronics, video and backing track. His work has been released under a number of pseudonyms, most notably ‘One Fat Man’. He nears completion of his PhD from the University of Waikato where he has been a Sir Edmund Hilary Scholar.

Robert Burns Fellow Majella Cullinane became a New Zealand resident in 2008. She has won several awards for her poetry and held Fellowship and Writer-in-Residence positions in her native Ireland and in Scotland. Her poetry and short stories have appeared in journals and magazines in Ireland, the UK, the US and New Zealand. In 2011 her first poetry collection Guarding The Flame was published in Ireland by Salmon Poetry. In 2012 Ms Cullinane was runner-up in the Landfall essay competition.

Frances Hodgkins Fellow Patrick Lundberg had his first solo exhibition A Cloud to the Back in 2006. Since then Mr Lundberg has exhibited his paintings, sculptures and installations frequently in New Zealand, along with shows in Melbourne and Sweden where he was born. He graduated with a Bachelor of Fine Arts from the University of Auckland’s Elam School of Fine Arts in 2005. He also took part in the Guest Student Programme at the Royal Institute of Art in Stockholm, Sweden, over its 2011-12 academic year. His latest exhibition, Games II, was held in the Robert Heald Gallery, Wellington.

Caroline Plummer Fellowship in Community Dance recipient Louise Potiki Bryant is an award-winning Māori choreographer who has created works for the Atamira Dance Company, Curve, the Black Grace Dance Company and more. Of Ngāi Tahu descent, Ms Bryant grew up in Dunedin, obtained a degree in Māori Studies from the University of Otago, a degree in Performing and Screen Arts from Auckland’s Unitec, and in 2003 she was Ngāi Tahu Artist In Residence at the Otago Polytechnic. In the last six months her works have appeared at Body Fest, Tempo Dance Festival, Kowhiti 2013 Atarau Festival of Indigenous Contemporary Dance, and, in collaboration with potter Paerau Corneal, at Pataka Gallery in Porirua and in the Slipcast touring exhibition.

University of Otago College of Education/Creative New Zealand Children’s Writer in Residence, Melinda Szymanik has been writing children’s fiction for some 14 years. She won the Children’s Choice Award at the 2009 NZ Post Children’s Book Awards with her picture book The Were-Nana (Scholastic 2008). She has twice been a finalist for the Joy Cowley Award (2003 and 2006) and was awarded a place on the New Zealand Society of Author’s mentoring scheme in 2005/6 during which she completed her first novel Jack the Viking (Scholastic 2008). Her latest picture book, While You Are Sleeping, was published in October 2013 by Duck Creek, and Song of Kauri is being released in English and Māori in June 2014 by Scholastic.