NZ political advertising – are we different? 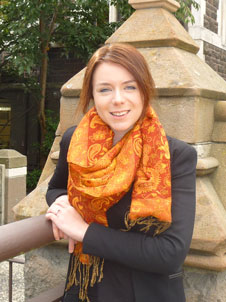 Politics PhD student Ashley Murchison’s political advertising study has revealed voters can be angered by ad content, and not necessarily the way the author wants.

Ms Murchison is examining the use of emotional appeals in election advertising, specifically looking at whether the images and music used produce different behavioural and political outcomes in the viewer.

“I have always been interested in this area because advertising plays such a key role during the election period,” Ms Murchison says. “I wanted to measure whether ads affect the desire to vote or the way people feel about different political parties.

“A lot of research has been done on this in the US. Very little has been done in New Zealand. Even when US studies have been conclusive there could be contextual and cultural factors that may cause the New Zealand situation to be different.”

The advertisements were shown in experiments and to focus groups who were questioned as to their response. Although her findings so far are inconclusive, Ms Murchison says interesting points have arisen.

“Previous US studies suggest that when people view a negative ad they may be more open to persuasion and more favourable to the party that created the ad. But in my study, when people watched a negative ad I didn’t see any evidence they were seeing the party more favourably. It could be that in New Zealand we have a backlash affect, with voters being pushed to favour the opponent.

“Sixty percent reported feeling angry after watching both the negative and positive ads, but it was more pronounced with the negative ads. When I asked who they were angry at, they answered it was the party who promoted the ad.”

Ms Murchison says she created the ad scripts to be readily adaptable as either a Labour Party or National Party promotion, avoiding direct policy statements. This in itself prompted strong reaction.

“The thing that came through from the focus groups was ‘if you are going to attack, you need to provide me with policy to back it up’. They didn’t want rhetoric they wanted policy.”

Ms Murchison’s active interest in political advertising goes beyond her PhD studies. She and her partner have set up www.electionads.org.nz.

“We’ve taken all the political advertising we can and uploaded it to the site,” Ms Murchison says. “We have some content dating back to 1925, such as old posters and Otago Daily Times ads. In part the site is intended to hold politicians to account for what they are saying in their ads. When campaign ads kick into full swing for the coming national election, voters can go to our site and compare what was being promised in 2008 and 2011 campaigns.

“Also, as a researcher it was a real nightmare collating ads for my studies, now there is a one-stop-shop archive other researchers can come to.