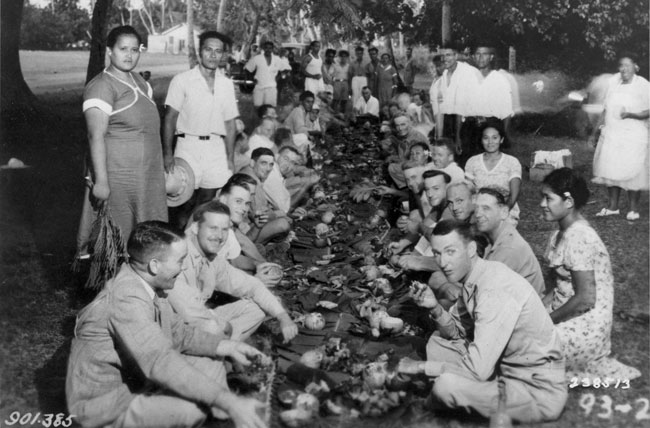 The best of hospitality for US Servicemen: the islanders play host during their time in Aitutaki, Cook Islands. 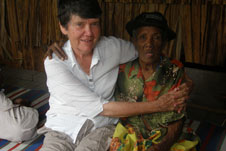 The University of Otago’s Professor Judy Bennett has her picture taken with Letisia at Koqeva on Guadalcanal, Solomon Islands, one of the few surviving Melanesian mothers of a child of a US serviceman.

When Professor Judy Bennett visited history colleagues in Canberra recently, she played the documentary on children of WW2 servicemen that was based on her Marsden-funded research.

“There wasn’t a dry eye in the house,” she says, of the largely Australian audience’s reaction after watching it.

On Anzac Day, April 25, the rest of the nation will also have the opportunity to see the film, when it screens on Māori TV on Freeview channel 5 and Sky TV channel 19 at 9am as part of the station’s Anzac morning coverage.

Between 1942 and 1946, World War II (and its immediate aftermath) brought to the Pacific two million American servicemen who struck up friendships with families and indigenous women.

When the servicemen went home, they left behind 100,000 dead, tonnes of military equipment and an estimated 2,000 “illegitimate” children. If there are war stories which don’t make the history books, then the stories of these children – the innocent and forgotten victims of war – are among them.

The documentary Born of Conflict – Children of the Pacific War is the first full length television feature to ask what became of these children. Based on the work of researchers at the University of Otago’s history department, the documentary includes three stories, all of them extremely moving and with some surprising twists.

“These important stories have been left out of histories of the war in the Pacific,” says Professor Bennett, of the University’s Department of History and Art History.

“We think these personal histories are of interest and significance to all in the region and beyond.”

First we meet softly spoken Arthur Black Beren of Kerikeri, who discovered when he was around eight years old that his father was an NCO in the US Army Supply Corp who had been transferred from Guadalcanal to Aitutaki in the Cook Islands. Here, Arthur Black Beren Snr fell in love with island girl Martha Taiono but was returned to the United States in 1946, just four months before Arthur was born.

Arthur was one of about 60 children left behind in the Cook Islands by US Servicemen during WWII. Like many others, Arthur had a wealth of unanswered questions and spent years wondering who his father was. He tried searching for him and, when he eventually located and visited his US family in 2011, discovered his father had also tried desperately to be reunited with him.

Similarly, Homer Willess was just 18 when he joined the American Navy in 1937. In 1940 he found himself assigned to a naval radio station on the island of Tutuila in American Samoa where two years later he met a young woman called Vaofefe. Although the Navy wasn’t allowing marriages at this time, Homer and Fefe persuaded their local minister to marry them.

"These important stories have been left out of histories of the war in the Pacific."

There is proof the US military did not allow marriages of personnel with indigenous women because they were aware of the discriminatory marriage and immigration laws of the various American states and of the US federal government. In New Zealand, many Māori women were able to prove part European ancestry and marry their sweethearts.

Homer and Fefe lived in the village of Utulei and had a son, but when Homer was returned to the United States and honourably discharged from the Navy in Jacksonville, Florida in 1945, the Navy refused to send “home” to his wife and child in American Samoa. They even threatened to send him to a medical testing facility if he kicked up a fuss.

Nevertheless, Homer was determined. He talks of his four-month struggle to be reunited with his wife and son – Homer returned in December, 1945 – and his marriage to Fefe which lasted for 68 years and produced two more children. His sons and daughter share their memories of what it was like growing up and straddling two different cultures.

Ina Hohaia was a teenager when she fell pregnant to an American serviceman who was in New Zealand for just five days. He left the country never knowing he had fathered triplets, John, Graham and Michael Gaeng. In Born of Conflict – Children of the Pacific War, Michael talks of his tough childhood and, as a malnourished five year old, being put with his brothers into the first of a succession of foster homes.

Finally they were placed with Tom and Kahu Whiteley at Te Teko in the Bay of Plenty and found the loving home they longed for. Michael and John stayed with the Whiteleys until they were 22; sadly, Graham died of cancer aged 19.

As a young adult, Michael made peace with his mother and discovered his father was an American serviceman called Kenneth Geange. He started searching for his father, not knowing he was spelling the surname incorrectly. Then, he wrote to the National Records Centre in the US and asked about servicemen with the surname Gaeng and finally Michael got the answers he had so long sought.

Within 24 hours, he discovered his father was dead but he had a whole American family: six half-brothers, two half-sisters and their children. As soon as they could, Michael, his wife Glennis and his brother John flew to St Louis and were greeted at the airport with a banner which read “Welcome home, brothers”. Nearly 15 years later, the family is in close contact.

Their poignant and often bittersweet stories have been told thanks to the three year research project Mothers’ Darlings, which started in 2010 funded by the Marsden Fund, Royal Society of New Zealand and based at the University of Otago. Led by Professor Judith Bennett and Dr Angela Wanhalla, the study aimed to discover the histories of the children born of conflict.

Prof Bennett told the documentary-makers she had done research on World War II in terms of its environmental impact. However, because she considered people to be part of that environment, Prof Bennett was curious about what happened to the children of American servicemen fathers and indigenous mothers.

“Whenever we do history, we potentially open a Pandora’s Box and we just have to try to do the least harm to people, certainly to the living, so I guess we are opening wounds but also hoping to close some too.”

The research team collected oral histories from people in the Solomon Islands, Vanuatu, Kiribati, New Zealand, Fiji, Tonga, the Cook Islands, Samoa and American Samoa. These interviews reveal a wide spectrum of real-life stories and experiences and provide valuable information about the social impacts of war which can last for generations after the fighting ends.

While the stories in Born of Conflict – Children of the Pacific War have happy endings and positive outcomes, Dr Wanhalla cautions that the study showed great diversity in the nature of the relationships.

“It’s important to remember not all these children are the products of romantic relationships,” she says. “There is a tendency to romanticise things, but some of these liaisons were brief encounters, flings and one-night stands, others involved prostitution.”

While the formal part of the Mothers’ Darling study has now ended, a book is soon to be published while the website www.otago.ac.nz/usfathers/ has been set up to help people seeking fathers to trace them.

Born of Conflict – Children of the Pacific War is one of a number of revealing documentaries screening this Anzac Day on Maori Television, the home of Anzac Day in New Zealand with a range of top quality all-day, free-to-air programming. All shows are in English or with English subtitles.