A career in education 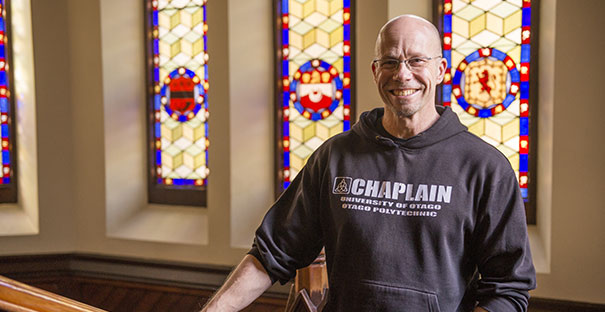 Mike Wright’s love of study blends in well with his current position – as a chaplain for students and staff at the University of Otago and Otago Polytechnic.

He is studying for a Doctor of Education (EdD), a professional doctoral programme which he hopes will enhance his career, and which he is studying by distance.

“I’ve been 14 years in this job, which is the longest I’ve ever stayed in one role, and I had started to wonder whether I should look at something different, or do I reinvent myself within it?

“I love my job so I chose to study.

“And from my work view, it’s very helpful to be studying – it allows me to be able to relate better to the students as I’m going through the same things.”

Mike chose the EdD for its professional development aspect.

Not a traditional PhD

The degree, which will give him the title of Dr once completed, has a different format to the traditional PhD. It has a year of coursework which is done in a calendar year and in a cohort of students, and prepares for the thesis and research-to-practice portfolio which forms the latter part of the degree.

Mike is now in the research stage of his degree.

The title of his research is The Contours and Expressions of Contemporary Student Spirituality at a New Zealand University: An Exploratory Study.

Using an American survey as a base, he is studying a group of first year students to see how they conceptualise their spirituality or faith, how they practise it, and what difference it makes to their lives as students at Otago University.

“I assume that everyone is spiritual as part of them being human. This survey may confirm that assumption, and perhaps open up new areas that we as chaplains are not aware of.”

Continuing to work while studying has been a challenge for Mike, but he is more aware than most of the support available to students at Otago, being part of the support team himself.

“My supervisory team has been really good and very collegial in the way they work, and having that cohort and being in touch with others who have done the degree helps support me when it gets tough.”