Finding clues to the past in leftovers 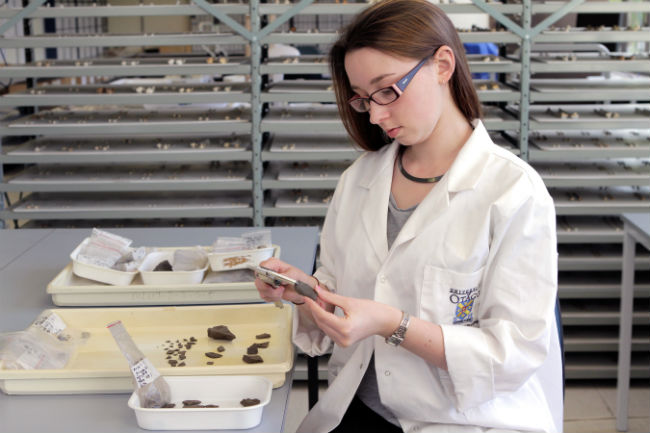 Julia Lewis spends much of her time looking at scratches on items discarded hundreds of years ago by New Zealand’s first settlers.

Her passion for her topic has carried her through an honours degree majoring in archaeology, and now on to a Master’s degree, with a PhD likely in her future.

“I’ve wanted to be an archaeologist since I was a teenager (in Wellington) – I was told Otago was the place to go, and here I am.”

Julia’s previous research was into a midden, or rubbish pile, left behind at Wairau Bar; now she is studying the tools produced at the site, about 700 years ago.

“For my honours' dissertation, I looked at the material left over from a single feast event– the rubbish found in a massive earth oven about five to six metres in diameter – I took a sample of bones from it.

From bones to tools

“The bones ranged from moa to elephant seal and dog, and my research looked into the modifications made to the bones by hunting, butchering, cooking, consumption and disposal practices, which were mostly in the form of cut marks, breakage, and burn marks.”

For her Master’s research, Julia has continued to look at the same site, but she is now considering the varying stone tools that can be found there, and the waste flakes from the production of adzes (a tool similar to an axe).

Julia has a long term plan to work as an archaeologist in New Zealand and is enjoying the transition from undergraduate to postgraduate study along the way.

“As you make the move from high school to university, and from undergraduate to postgraduate, the structure is gradually removed and you have to set your own goals.
“It can be hard, but it’s really rewarding.”

Her main goal now is to get more field experience. Her experience so far was “awesome” and cemented her love for archaeology and the “big family” that forms Otago's Department of Anthropology and Archaeology.

“The people make the experience.”