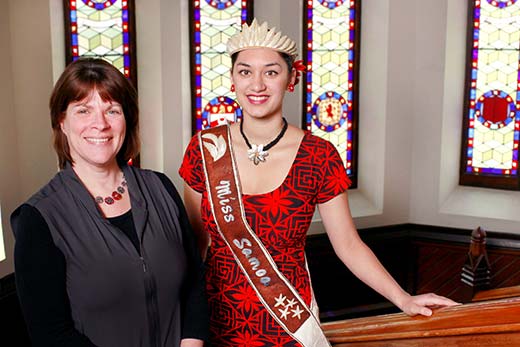 The Miss Samoa pageant’s contestants are expected to emerge as role models for the younger generation, to represent a variety of professions, attitudes, skills and interests and also to be spokeswomen of the Samoan culture.

As well as taking the overall honours, Latafale also won the award for Best Interview, which she largely put down to academic and debating skills gained through her law studies, and on-stage confidence and presentation skills from her music studies.

In her pre-pageant interview, Latafale discussed gender equality issues in Samoa and its UN obligations in this area. Her pageant interview saw her asked whether or not she would become a politician and her reasons for the choice. She said she would, arguing the importance of giving women a much greater voice in the halls of power. She also spoke of her desire to effect positive change and contribute to developing the lives of Samoa’s people.

A third-year Law and contemporary voice music student, Latafale also stars in Otago’s latest television commercial, released in June. In the advertisement she is perched as a rock-climber high up on a cliff face at Long Beach while fellow student Jordan Grimmer dangles below. The pair plays out a legal conundrum; whether you are within your rights to take one life to save another.

Latafale grew up in Auckland and won a scholarship to attend King’s College where she graduated as Deputy Head. Her first taste of Otago was through the Pacific Islands Centre’s annual On-Campus Experience for secondary students. She was later invited back to Dunedin by the Faculty of Law.

The latter visit sealed her intention to attend Otago and she enrolled with the support of the Faculty’s prestigious five-year scholarship and the University’s Pacific Island Entrance Scholarship.

Latafale paid tribute to all the support she has received from the University, especially through the Pacific Islands Centre and Faculty of Law.

“For example, without their tutoring programme, I’m wouldn’t have achieved the results I did in first year. They have really great structures to allow students to achieve, as long they are willing to put in the effort,” she says.

Latafale has also represented New Zealand in singing through the New Zealand Secondary Students’ Choir and is a member of the National Youth Choir. She competed for New Zealand and demonstrated Samoan colours in the World Championship of Performing Arts in Hollywood in 2013.

She will represent Samoa at the Miss South Pacific pageant in December.