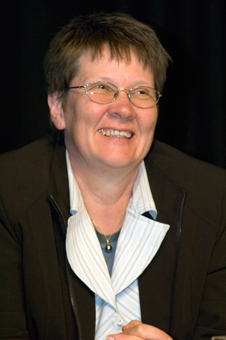 Associate Professor Ruth Fitzgerald, of Social Anthropology, was last night named the OUSA Supervisor of the Year for 2014.

Glowing recommendations from her research students described Associate Professor Fitzgerald as encouraging, consistently supportive, and an “interesting, intelligent, experienced academic mind with a wealth of knowledge”.

She heads a list of top supervisors in the annual awards.

The title of Best New Supervisor of the Year was awarded to Dr Prasad Nishtala, of the School of Pharmacy, of whom one of his students said: “I believe this award would only contribute the smallest amount of gratitude to everything he has and continues to give his lucky students.”

It was the second year in a row Associate Professor Regenbrecht was presented the Commerce award.

A special, posthumous commemoration was announced for Professor Jules Kieser, of the School of Dentistry, who passed away during the year.

The supervisors are nominated and voted for by students, and each year OUSA receives a raft of nominations for a wide range of supervisors, a testament to the hard work put into supervision of honours, masters and doctoral candidates every year, and the esteem in which supervisors are held.