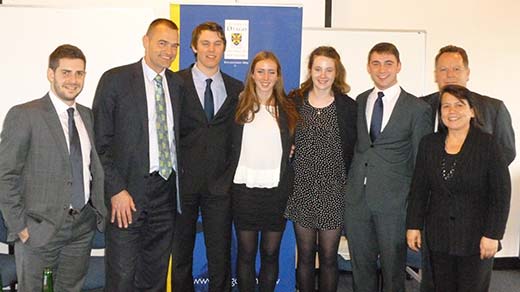 The competition is exclusive to Otago University students studying second year law papers in 2014. It requires a demonstration of legal analysis, communication, and teamwork skills – the key attributes of a top lawyer. The competition focuses on some of the key principles students have learnt so far in property and contract law, with a couple of extra issues thrown in. The scenario this year involved problems arising from a commercial lease.

Students worked in teams of four, acting as staff solicitors of a made-up firm, to come up with legal advice for the scenario. They first submitted their brief and analysis in written form, which was followed by presenting their case to their hypothetical supervisors (played by Partners from Kensington Swan). In the grand-final, the top two teams then had to present to the hypothetical client, in front of an audience of faculty and peers.

Not only is this a great experience for all the students who participated, but the winning team also receives a cash prize of $2,000 and a trip to Wellington to experience a day in the working life of Kensington Swan’s award winning teams.