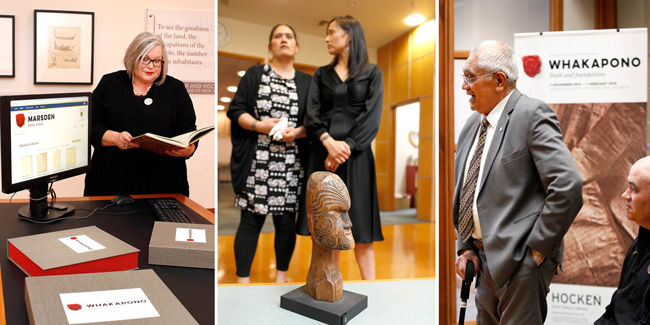 About 50 guests yesterday attended an emotional mihi whakatau and blessing for a carved taonga (treasure) that was flown from Auckland to Dunedin to take its place among the exhibits in an exhibition showcasing missionary Samuel Marsden’s legacy at the Hocken Library.

The 200-year-old taonga, a small wooden head depicting Ngāpuhi chief Hongi Hika, was carved by Hongi himself in 1814 from a fencepost. It had been created for his friend, missionary Samuel Marsden.

Brought directly from Dunedin airport with three minders from its home at Auckland War Memorial Museum, the small and exquisitely-carved head, cushioned inside a small suitcase, was blessed and then shown to the assembled guests of historians, Hocken staff and University of Otago Māori staff and students.

“It was very special, and to have this privilege of hosting this small carved taonga at our Whakapono Faith and Foundations exhibition to mark 200 years – the bicentenary – since the church missionary society first set up their work in New Zealand.”

The exhibition also marks the launch of the new online Marsden archive at the Hocken – in which hundreds of fragile and very old letters, diaries and documents once belonging to Marsden and the Church Missionary Society of England have been transcribed and scanned into a new database from which researchers can retrieve information on these early New Zealand missions.

The significance of the papers, and how they will be used was the topic of a Radio New Zealand Nine to Noon interview with Otago History Professor Tony Ballantyne. Listen to it here.

The launch was also covered by One News. Watch it here.