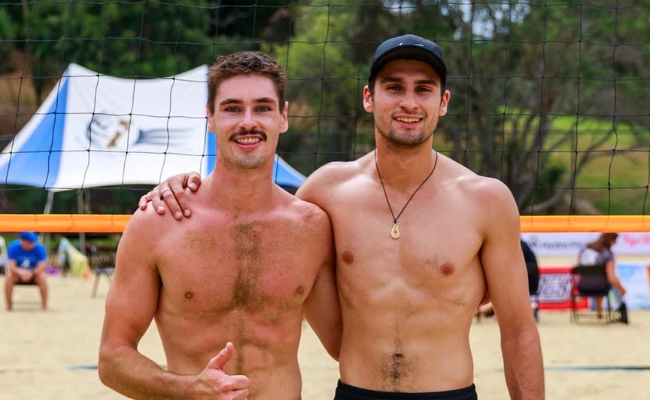 Eric Stratton and Will White are heading overseas to compete at the FISU World University Beach Volleyball Championship.

Stepping out of winter and onto Brazilian sands will be a stark contrast to what one Otago volleyball duo has been used to in training.

Master of Sport Science graduate Will White and Law and Commerce student Eric Stratton are packing their bags and heading to South America after training in Dunedin for a major international tournament.

The pair will represent New Zealand at the FISU World University Beach Volleyball Championship in September this year.

Will, who since completing his studies works as a research assistant at the University, says the event is an “exciting opportunity”.

“We head to Los Angeles first and play a few events on the California Beach Tour and get some training in with the top teams there.”

The main event following is the Brazil champs which will take place in Maceio and features teams from around the world.

Will and Eric were selected for the championship after a busy New Zealand tour over the summer months. The two joined forces after meeting at university but also both happen to hail from Tauranga, Eric says.

“We both played indoor Volleyball in Tauranga before moving to Dunedin. We kind of knew of each other from home but Will ended up being my RA in first year. He asked then if I wanted to join the indoor club at Uni.”

The boys are now a solid team, stepping out onto international soil together.

“Most of the teams at that event are already playing professionally,” Eric says. “It will be exciting to see how we match up with those teams.”

While it’s mostly an exciting adventure ahead, the duo is being cautious to stay well on their travels.

Unlike many team sports, Volleyball doesn’t have subs waiting on stand-by – making a need to avoid COVID-19 or injury paramount in order to compete.