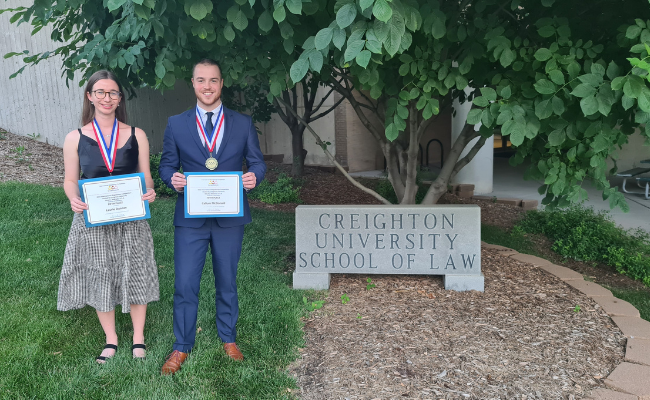 Learning the law doesn’t get more hands-on than negotiating with the cream of the crop on international soil.

For law students Callum McDonald and Laurie Duncan, this is exactly what 2022 has brought their way with little notice and maximum results.

Accompanied by their coach Associate Professor Selene Mize, the pair travelled to Nebraska in June to represent New Zealand at the International Negotiation Competition hosted by Creighton University.

The event ran over three days and the team finished in fifth place out of 14 countries – a solid result for only six weeks preparation for the competition. Callum and Laurie stepped in at the last minute after the original New Zealand team withdrew, all while completing their semester 1 exams.

“It was an intense few days,” Callum says. “You could tell the other students were hugely capable and it was fantastic to get along with them all outside of the competition on a more personal level. Law degrees tend to be quite theoretical so it was great to have this practical experience.”

The Bachelor of Laws (Honours) and Bachelor of Science student says the competition presented an incredible development opportunity.

“It was amazing to see the different approaches each team took. While many countries took a cooperative approach, the team from Boston were more assertive with theirs. It was interesting to be exposed to other ways of negotiating – in New Zealand you tend to get used to one way of negotiating. It was great to start identifying what other cultures value and how you see that translates into their work.”

Bachelor of Laws and Bachelor of Arts and Science student Laurie says while her and Callum hadn’t negotiated as a team before, their trip was nothing short of a success.

“The overall theme this year was around music recording contracts. We were given confidential ‘client’ information to work with. We had to go into these negotiations thinking of how to get the best deal for our client, while considering what kind of relationship our client would want with the opposition’s client in the future.

“It was amazing to be representing New Zealand. Other countries had over 20 teams compete to represent them at an international level.”

This year was the first time the event has been in person since the outbreak of COVID-19 in 2020. The duo was honoured to receive sponsorship from Wynn Williams, Anthony Harper and a particularly special grant from Vice Chancellor Professor David Murdoch.