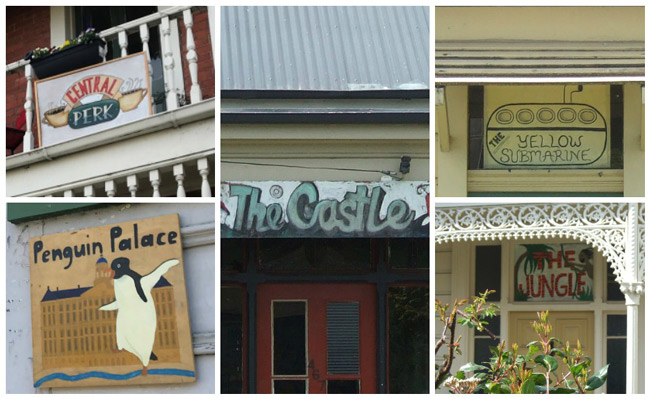 Some of the named student flats which will feature in Ian Chapman and Sarah Gallagher's new book Scarfie Flats.

Two Otago staff members from different corners of the campus are collaborating on a book which they hope will help preserve a slice of Dunedin and Otago history – but they need help.

The Department of Music, Theatre and Performing Arts’ Dr Ian Chapman, and Dunedin School of Medicine Social Media Adviser Sarah Gallagher are working on Scarfie Flats – a personal project to each of them – a book which will bring together a selection of Dunedin’s well known and less well known named flats spanning the 1930s to today.

Right now the pair are looking for contributions of information – photos, stories and ephemera from the time such as concert tickets, posters, party invitations to help put named flats into their social context. These are welcome via email sarah.gallagher@otago.ac.nz or ian.chapman@otago.ac.nz or through the Dunedin Flat Names Project website and are due by mid-July at the latest.

"We want to capture the esprit de corps of students between these pages! The joy of being young, creative, and free from responsibility, in those formative years in students' first home away from home."

The collaboration occurred when the pair realised they had both been working on a similar project for some time.

For Dr Chapman, a music iconographer and prolific author, it’s been about noticing the changes in student culture over the years and particularly the student engagement and intersections with wider popular culture. For Mrs Gallagher, it’s been a long-term affair of preserving the ephemeral and unique culture of Dunedin student flats through photographing, mapping, researching the origin of the names, and building an online community using social media as the Dunedin Flat Names Project.

Both are thrilled to be collaborating.

“It means a great deal to be collaborating with Ian,” Mrs Gallagher says. “I've been working on this on and off for a long time now and have had a couple of failed attempts with publishers so I'm thrilled to be working with Ian to see it finally come to fruition. It's really valuable to have a collaborator who has a great relationship with a publisher already and a track record of successful books. It's really exciting too, to work with someone on a topic you love, who really gets it, and who also comes from a background in visual culture.”

"... we are preserving a slice of very important history; a history that will have a huge nostalgia component for so many alumni who have passed through here and experienced these flats."

“It’s wonderful to have someone to work alongside,” Dr Chapman says. “My eight previous books - bar one - have all been sole-written affairs, and it can get a bit solitary. Having such a great and fully engaged co-author is wonderful.”

Scarfie Flats will be highly pictorial – but its intentions go far deeper than just quirky photos, as they both explain.

“We hope everyone will really enjoy this book and find something in it that sparks memories of their time flatting as a student at Otago,” Mrs Gallagher says. “We want to capture the esprit de corps of students between these pages! The joy of being young, creative, and free from responsibility, in those formative years in students' first home away from home. Students have told me they believe this is an important aspect of their culture to preserve. Ian and I wholeheartedly agree.”

Dr Chapman says that while the high quality production values and the fact that it is so pictorial will inevitably lead some people to categorise it as a ‘coffee table book’, it will actually go deeper into the named flat phenomenon than the ‘coffee table’ descriptor often infers.

“It’s a book that will both entertain and educate. Also, with the Otago student experience changing significantly and quite rapidly, these iconic flats may well not be around in a decade or two. So we are conscious that we are preserving a slice of very important history; a history that will have a huge nostalgia component for so many alumni who have passed through here and experienced these flats.”

Scarfie Flats will be published in January 2019 through new publishing house, Imagination Press.

Do you have something to offer?