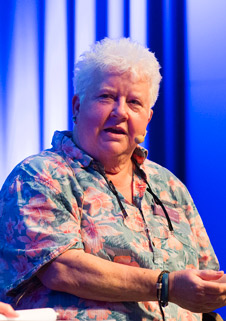 Her books have sold more than 15 million copies, been translated into 40 languages, and received numerous accolades. Now Val McDermid has her sights set on Otago.

The University has announced the Scottish novelist will be a Visiting Professor of Scottish Studies and Crime Fiction, in the Division of Humanities, from 2019 to 2021.

For each of the three years, Professor McDermid will spend up to eight weeks a year in Dunedin, where she will be attached to the Centre for Irish and Scottish Studies.

Along with mentoring postgraduate students, she will contribute to undergraduate courses in Scottish Studies, crime fiction and creative writing, and give a number of public lectures and readings.

The appointment has been described as “tremendous” and “exciting”, and of huge benefit to Otago.

"To have a writer of Val McDermid’s eminence and experience attached to the centre over a sustained period will be of significant benefit to our students, our programmes and our whole institution."

Welcoming the news, Scotland’s First Minster, Nicola Sturgeon, says: “As one of Scotland’s greatest crime writers Val McDermid has a talent for keeping readers on the edge of their seats with her suspense-filled mysteries. She also has a real understanding of Scottish history, our politics and the Scots psyche that should make for a fascinating contribution to Scottish studies.

For the University, Professor Liam McIlvanney, Stuart Chair of Scottish Studies and Co-Director of the Centre for Irish and Scottish Studies adds: “This is a hugely exciting appointment for Otago. To have a writer of Val McDermid’s eminence and experience attached to the centre over a sustained period will be of significant benefit to our students, our programmes and our whole institution.

Professor McDermid expressed her excitement at the appointment.

“I have wonderful memories of Dunedin, so I’m delighted to be returning as Visiting Professor at Otago.

“I’m excited at the prospect of working with Professor McIlvanney and his colleagues in Scottish Studies and in Creative Writing over an extended period. And I anticipate this change of environment will fuel my creativity and drive it in new and challenging directions. It’s a tremendous opportunity – a dream ticket, really,” she says.