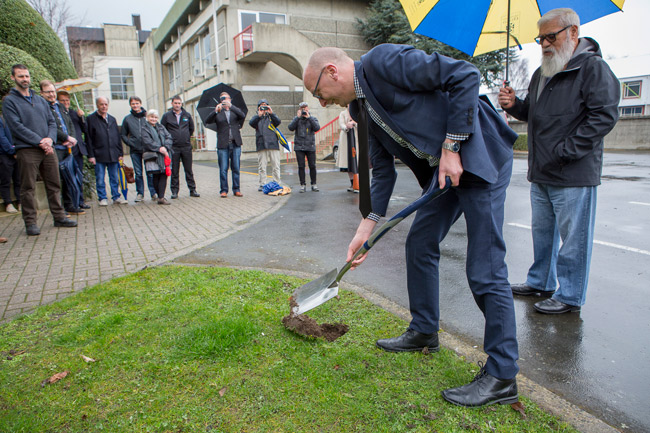 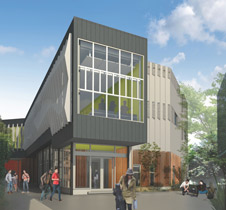 An artist’s impression of the entrance to the new Music, Theatre and Performing Arts development.

“We already have a strong tradition in music and performing arts, and this development will enable our students to learn in world-class facilities with some of the best teachers in their area,” he says.

“It will also allow our staff to perform, record, and produce their work in a truly excellent setting.

“The new centre will also benefit the local community, who will be able to enjoy performances that will be open to the public. We are excited about what can be accomplished, and think this only adds to Dunedin’s standing as an outstanding centre of culture and learning.”

Just before the symbolic turning of the first sod of soil, University Kaitohutohu Māori/Māori Advisor Hata Temo performed a special blessing of the site, which is currently a carpark beside the Robertson Library off Union Street East.

"We already have a strong tradition in music and performing arts, and this development will enable our students to learn in world-class facilities with some of the best teachers in their area."

University Campus Development Senior Project Manager Steven Ireland says the centre will have nine purpose-built studios and music teaching practice rooms. It will accommodate an orchestra and host audiences of up to 100.

“The new building is needed to replace existing recording studios at 180 Albany Street, which have limited use, and to provide the latest in purpose built facilities for today’s students.”

Parts of the first floor of the western end of the neighbouring College music block will be renovated, including the existing music suite.

“The University considers the East Precinct a key area for the future development of the Division of Humanities and the relocation of the Department of Music, Theatre, and Performing Arts Te Kāhui Tau is the first step towards that future.

“Co-location of staff, students, and activities should improve efficiency, communication, collaboration, and innovation, while forging closer links between the Department of Music and the College,” he says.

The existing recording studio at 180 Albany Street was built in 1967 to house the New Zealand Broadcasting Authority (NZBA). It was based on the Abbey Road studios in England, where the Beatles recorded several albums. This site will be demolished once the new building is operational. Demolition is the most cost-effective option for dealing with asbestos, which has been found in the studios, and will free that site for development.

Mr Ireland says the Arts Centre should be completed by the end of next year, and will provide a greater sense of a performing arts and music community on the campus, and in Dunedin.