Original Rain installed at the Hocken 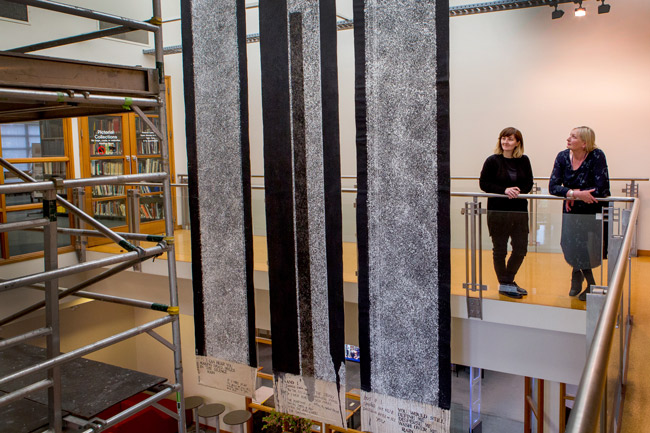 Hocken Head Curator Robyn Notman and Curator Andrea Bell with Ralph Hotere's Rain, which has this week been hung in the foyer of the Hocken for the Burns Fellowship 60th anniversary celebrations next month and the University's 150th celebrations in 2019. Photo: Sharron Bennett.

One of the most significant art works in the University’s collection has been hung in the Hocken foyer – to celebrate both the Burns Fellowship 60th anniversary events taking place in September, and next year’s University 150th anniversary.

Rain by the late Ralph Hotere comprises three five-metre high banners, incorporating the poem Rain by the late Hone Tuwhare. The pair were University of Otago Arts Fellows in the same year – 1969.

"Rain is to me the ultimate expression of the creative relationship, understanding and friendship between two of this country’s most important artists."

The banners were commissioned for installation in the University’s McCoy and Wixon designed 1979 Hocken Building (now the Richardson Building), but were removed in 2007 due to concerns they were deteriorating because of light, temperature and wind. A replica was returned to that building in 2013, and the original was stored at the Hocken with the Pictures Collection and conserved in 2011.

Hocken Registrar Victoria France and a team from Property Services led by Steven Abernethy have worked for two days to hang this original in the Hocken foyer.

Hocken’s Head Curator of Pictorial Collections Robyn Notman believes it is the “ideal piece” to display at the Hocken to celebrate the 60th anniversary of the Burns Fellowship.

“Hotere was the Frances Hodgkins Fellow in 1969 and Hone Tuwhare was a Burns Fellow in 1969 (and then again in 1974). Rain is to me the ultimate expression of the creative relationship, understanding and friendship between two of this country’s most important artists.

“So many people, including me, loved this work and as students it really affected us when we saw it as we were going to lectures in the Hocken Building.”

Ms Notman says the banners will remain up until at least the middle of next year – “which is great for the 150th year and our visitors.”