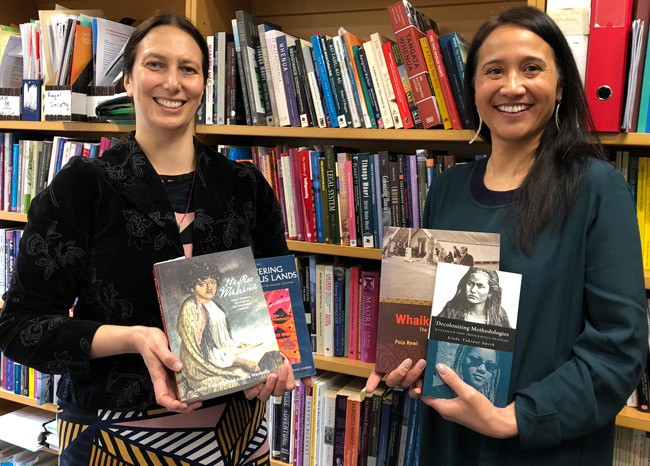 “I’m going to go broke buying all these books.”

That’s just a taste of the positive feedback three Otago academics have had to the Te Takarangi Project they’ve been running on social media since February.

Information on each book is also published on the society’s website, with the final profile appearing on Friday 14 September, the last day of Te Wiki o Te Reo Māori (Māori Language Week).

Professor Ruru says the project has been widely shared and has also resulted in working with the Hocken Collections and National Library to ensure they have copies of all the books and in some cases digitised copies.

Focusing on non-fiction research publications, the collection provides an overview of Māori scholarship, including books by important university scholars and iwi leaders.

“It’s a reminder of the importance of Māori thinking and writing that has occurred in Aotearoa since that first Te Reo Māori publication in 1815.”

The next stage of the project is to take the collection on tour. First stop is the launch in Parliament on 16 October, hosted by the Minister of Māori Development Nanaia Mahuta. In November, it will feature at the International Indigenous Research Conference in Auckland.

Te Takarangi’s organisers plan to bring the collection to Otago in 2019 as part of the University’s 150th celebrations, highlighting the many books that are written by Otago staff and alumni.