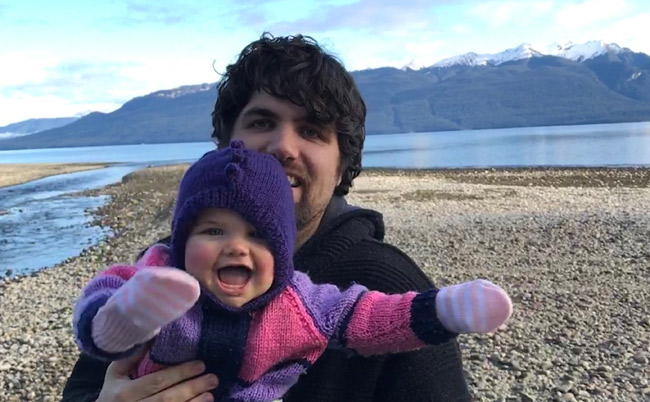 Composer Corwin Newall with baby Eleanor, the inspiration for his winning piece.

The experience of having a new baby inspired Corwin Newall to write the composition which has won this year’s University of Otago Philip Neill Memorial Prize in Music.

Mr Newall, a Wellington-based composer who completed his Honours degree at Otago in 2014, says becoming a parent presented a level of difficulty that society did not adequately warn him about.

“A baby is simultaneously more hard work and more rewarding than one could possibly foresee. #Babylife is a sonata-form, scherzo summary of early parenthood: cute, chaotic, sweet, sleep-deprived, delightful, and disagreeable all at once.”

Mr Newall looks after his daughter Eleanor on Thursdays, Fridays and Saturdays while his wife Stephanie is at work and says that for a month or two before the prize deadline “naptime meant music time”.

"A baby is simultaneously more hard work and more rewarding than one could possibly foresee. #Babylife is a sonata-form, scherzo summary of early parenthood: cute, chaotic, sweet, sleep-deprived, delightful, and disagreeable all at once."

“Eleanor was already an independent baby, so if she was awake she sometimes didn’t mind hanging around me while I played on the grand – as long as I’d pick her up sometimes to let her play it! I sometimes wondered what the neighbours thought of the strange combination of pleasant and not-so-pleasant notes wafting out of the lounge window.”

He says that like many non-parents, he and Stephanie “waltzed right into parenthood” thinking they’d be fine.

“Nope! They told us how crazy it would be, and we didn’t believe them, didn’t comprehend how life-changing being a parent would be – especially compared to being just a married couple working full-time in jobs using our degrees. I seem to recall in that previous life that you could Just Go Out For Dinner and a Movie, or, say, Sleep For Six Consecutive Hours Any Night You Want.

“But then, I also didn’t realise how immediately and completely one falls in love with one’s child.

“I’ve tried to capture this in the music. It’s in sonata form – that is, two contrasting themes in related keys, a development section fleshing it all out, then the themes again but in the same key, and something loud to wrap it all up.

“There are colourful quick sections which might portray her learning to crawl – first Eleanor (or a baby you know) is like the Terminator using one arm to come after you, then progressing to all-fours full tilt towards any open door she sees. The second theme is a respite from the chaos; lyrical and slower moving. I like to imagine that it’s us watching her sleeping soundly, conveniently forgetting how difficult the last hour was getting her to sleep.

“The coda at the end is us realising the whole piece was actually not in the key we thought it was in, all along. It’s a stretch, but we could make a case for that being about pulling through in the end.”

The Prize was established in 1943 in memory of the late Philip Foster Neill, a Medical student who died in 1943, and is New Zealand’s longest running composition prize.

It was first awarded in 1944, and the list of former recipients reads like a who’s who of best New Zealand’s best composers over the years, including Douglas Lilburn, Edwin Carr and Sir William Southgate.

"I’m very grateful for this prize and the competition itself. Thank you to the late Philip Neill’s family and the University."

This is the second time Mr Newall has been awarded it. In 2012 he won the award for a piece called Scientists – for which students of the University’s Centre for Science Communication wrote the lyrics.

“Corwin has a vibrant musical imagination. He thinks outside the square and enjoys innovating, but at the same time is not afraid to entertain the audience which is not something all composers do these days! He has an excellent grasp of technique and knows how to write for instruments.

“#Babylife is a bubbly, energetic piece for two pianos, which has an active role of the page turner. The page turner represents a baby between the two parents, represented by the pianists.

“Corwin enjoys the theatrical nature of music as well as the aural, and this piece certainly features that.”

For Mr Newall, winning is a validation that he is still able to write music despite now working as a software developer.

“When I won this prize before, I was in the thick of it at University studying music and computer science. I’ve been working as a software developer for the past few years now, which has left me with less time for composition.

“I’m very grateful for this prize and the competition itself. Thank you to the late Philip Neill’s family and the University.”

Professor Ritchie says the University is looking forward to mounting a performance of #Babylife in 2019.