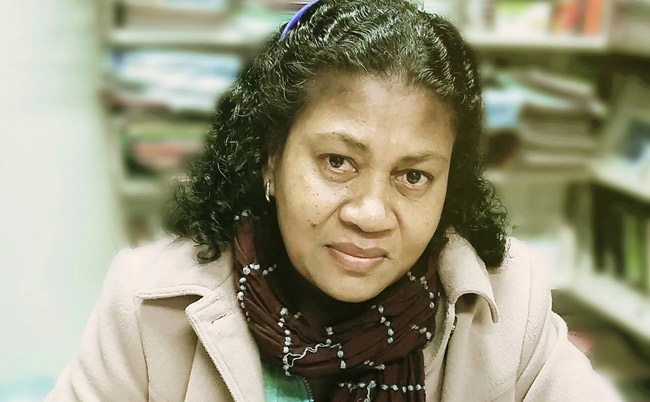 Dr Alumita Durutalo, who died last month, was a beloved member of the Otago community.

Colleagues, students, family and friends of Dr Adi Alumita Durutalo came together at Te Tumu last month, to honour and remember a deeply spiritual woman, a wonderful mother, and a respected academic; a teacher who cared so much for her students that she called them her “kids”.

Dr Durutalo, a lecturer at Te Tumu, died suddenly in her office on Monday 8 October, following a long battle with her health.

A Fijian national, Dr Durutalo came to Otago in 2013 from the Australian National University, a leading centre for study of the Pacific where she earned her PhD.

She developed a wide ranging set of research interests, including indigenous leadership, and development in the Pacific Islands, democratisations in the Pacific, and indigenous languages, culture and identity among Pacific migrants.

She made a significant contribution to the Pacific Islands programme in Te Tumu, including establishing PACI 103 – Languages and Cultures of the Pacific: An Introduction. She also taught in Te Tumu’s Master of Indigenous Studies programme.

Her memorial service, held on Friday 12 October and led by Chaplain Greg Hughson, was also livestreamed, and viewed by members of her family based in Australia and Fiji.

"It is very sad that Alumita is no longer with us. I appreciate the contribution she made to our institution and I know that she will be sorely missed. We will keep her in our memory."

Speakers at the service spoke of her impact within and beyond the University.

Deputy Vice-Chancellor (academic) Professor Vernon Squire speaking on behalf of the University’s senior management, said while he hadn’t personally met Dr Durutalo, he “knew of her mana – which lives on, and is huge”.

The Acting Pro-Vice-Chancellor (Humanities) Associate Professor Tim Cooper acknowledged the tremendous loss felt by Dr Durutalo’s family, colleagues in Te Tumu and the wider University, and her many friends in Dunedin and the Pacific.

He read words written by Pro-Vice-Chancellor Professor Tony Ballantyne, who was unable to attend.

“Over the past five years I had a number of conversations with Alumita and I learnt a lot about her values and priorities.

“From those conversations, I know that she was deeply passionate about her Fijian homeland and about Fijian politics. It was also clear that she was woman of faith and that her relationship with God was an integral part of how she thought about the world.

“But what really came through clearly in our interactions was her commitment to the development of the Pacific. A couple of years ago, at a Pacific Voices postgraduate showcase, we talked over afternoon tea about the importance of education as an instrument of change, its power to transform the lives of individuals, families, villages and whole nations.

"She was humble, and respectful to people, and very inclusive. She demonstrated a keen sense of hospitality.” ."

“It is very sad that Alumita is no longer with us. I appreciate the contribution she made to our institution and I know that she will be sorely missed. We will keep her in our memory."

A visibly emotional Dean of Te Tumu, Professor Poia Rewi, also spoke at the memorial, sharing comments made by his colleagues:

“Alumita loved the University and Dunedin. She was well respected by her students.”

“Fijian through and through, she cared deeply for the future of her land.”

“She was humble, and respectful to people, and very inclusive. She demonstrated a keen sense of hospitality.”

“She was a caring person, who will be missed.”

He finished by thanking Dr Durutalo’s four children for “giving us your mum for the last five years”.

“Little we can say that will ease the grief, but a lot we can say when we think about the things Alumita achieved while at Otago.

“Today the Pacific tides lap upon the shores leading you home.”

Dr Patrick Vakaoti, the Associate Dean Pacific in the Division of Humanities, and also a member of Dr Durutalo’s family also spoke through his grief.

“Alumita Durutalo was not only a colleague, but a relative.

"Alumita played to her academic strengths. She introduced the first Fijian language class at the University and flavoured her other papers with her interests in Pacific politics and leadership, elections and democracy."

“In a learning community where Fijians are a minority, she offered a sense of familiarity. We were close. Not only because we were related but because our tertiary education had a mutual beginning at the University of the South Pacific in the early 90s.”

He thanked Te Tumu for providing Dr Durutalo with her intellectual home.

“Alumita played to her academic strengths. She introduced the first Fijian language class at the University and flavoured her other papers with her interests in Pacific politics and leadership, elections and democracy.

“Her death has left a dent in the already small number of academics with links to Fiji.”

He said she was a role model – and hoped she would inspire other Fijians to aspire to greatness in academia.

“We will miss her presence and her eager smile for the rest of our lives,” he said.

“To many she was a great academic and scholar, but to us she was our mother. We will never again experience the love and compassion that she shared amongst us.”

"To many she was a great academic and scholar, but to us she was our mother. We will never again experience the love and compassion that she shared amongst us."

Other speakers at the memorial included her Pastor at the Elim Church, Pastor Hon Chew Then, and her youngest brother Penaia Verebalavu.

Each spoke of the importance of God in her life, and the depth of her faith.

Her brother also described her resilience – raising four children alone following the death of her husband in 1994.

“She loved Dunedin,” he said. “She thought it was the best place on earth. I said: ‘What about Fiji?’, and she said: ‘Well, Dunedin and Fiji'.”

He also spoke of her love for rugby – reinforced by the fact her son Andrew moved to the US to play for the USA team.

She spoke of her mother’s incredible life.

“We have witnessed the silent and courageous struggle of our mother. While putting us through school, she was also putting herself through school.

She said her mother loved her students, and referred to them as her kids.

In fact, it became confusing, she said – they were sometimes unsure whether their mother was referring to them or her students.

The memorial service closed with a prayer in Fijian.