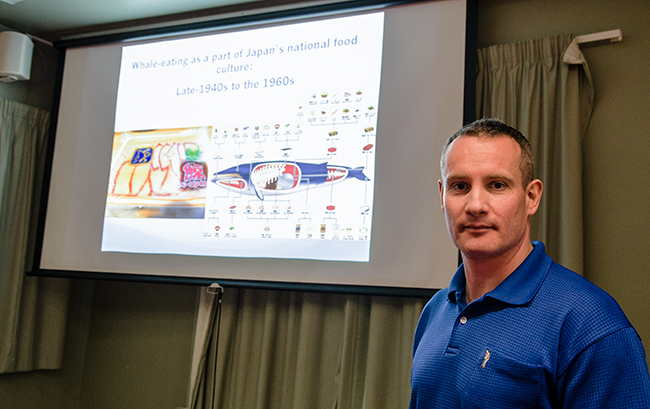 Why is whaling so important for Japan? Department of Languages and Cultures PhD graduate Balazs Kiglics opened his public lecture at the Dunedin campus this week with this seemingly straight-forward question before showing the political and historical complexities of this divisive issue run very deep.

Balazs argues that while cultural reasons are often used to justify Japan’s continuation of whaling in the Antarctic, which they say is scientific research, a close investigation of the history of whaling in Japan shows the practice was largely a 20th century phenomenon.

Before this – perhaps for several millennia – a handful of coastal communities had practiced “passive” whaling, whereby they extracted meat, bones and useful items from whales that were stranded in shallow waters. Later, hunting from boats was restricted to a few areas, but not to the extent that whale meat was ever a staple of the Japanese diet.

The cultural impact of whaling was perhaps wider felt as whales came to be associated with abundance, prosperity and Ebisu, the god of fishermen and luck. The distinctly Japanese Shinto deity is the only one of the Seven Gods of Fortune in Japanese mythology to have originated without Hindu or Chinese influence. 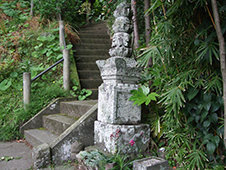 A whale tombstone at Choshoji.

So revered were the whales’ kami (spirits) that numerous shrines and other monuments were built around coastal Japan, often containing the bones and remains of stranded whales, and many remain listed as sacred sights.

In its justifications of contemporary research, and industrialised whaling, Japan harks back to this age.

Balazs says that American whalers were given short shrift if they found themselves behind the ‘bamboo curtain’ in the 1820s, and it was not before the introduction of Western technology and equipment in the Meiji period (1868-1912) that commercial whaling really took off in Japan.

In 1899 the Japanese government introduced the Deep Sea Fisheries Promotion Act that promoted offshore fishing as a way to support industrial growth, and whaling was a well-established part of the economic landscape by the time it annexed the Korean Peninsula in 1910. By 1934 Japan’s whalers were venturing as far south as the Antarctic and at the peak of Japanese whaling, in 1962, some 222,000 tonnes of whale meat were consumed nationally. The economic boom was nearing its zenith, and by the 1970s most of Japan’s large-scale whalers were bankrupt.

Various political connections have meant whaling companies have received subsidies – figures from the early 2000s suggest this could be as high as $10 million annually – and managed to maintain their political clout as lobbyists, he says.

Between 1987 (when an international moratorium on whaling came into effect) and 2014 Japan culled about 15,271 whales under the International Whaling Commission’s Special Permit Catch category. This meant Japanese fleets took 94.3 per cent of all whales taken for scientific research globally.

The appetite for the meat has waned, and it is estimated that thousands of tonnes of whale meat remains unsold in freezers across Japan every year. A drive to sell the residue from experimentation in 2012 saw only 25 per cent of the stocks of meat were bought by the public, he says. 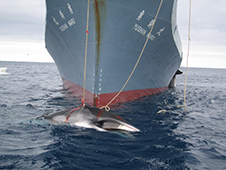 Whale meat is that it is full of a vast quantities of humanity’s gift to the sea; because toothed whales are at the apex of the marine food chain, they accumulate high levels of pollutants, both of the plastic and chemical variety, including mercury, cadmium and PCBs.

Despite sustained international pressure from a number of governments, organisations and environmental groups – Sea Shepherd and Greenpeace are often labelled “eco-terrorism” groups by the mainstream media, government organisations and various pro-whaling groups in Japan – whaling is now associated with resistance to foreign pressure.

“It has become an issue associated with national identity and cultural sovereignty for certain influential groups, instead of remaining what is really should be – an issue of conservation and environmental protection,” Balazs says.