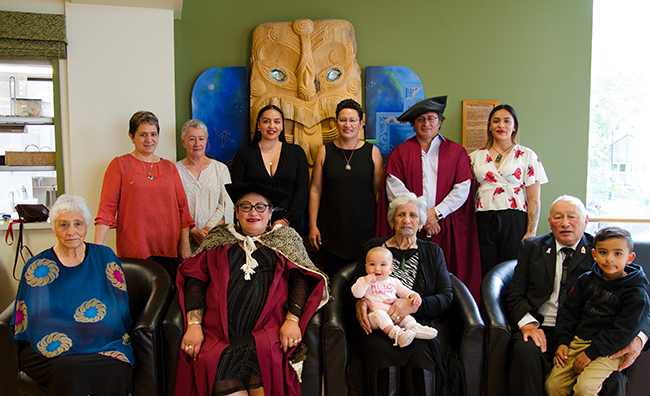 Tangiwai Rewi says while she was proud to cross the graduation stage to become the first person in her family to gain a PhD, her family’s celebrations in Dunedin in mid-December also acknowledged the value to her whānau of investing in knowledge.

The Te Tumu School of Māori, Pacific and Indigenous Studies Senior Lecturer, who is of Waikato-Ngāti Tīpā, Ngāti Amaru, Ngāti Tahinga descent, was joined in Dunedin by whānau from around the country for her graduation on 12 December.

“My parents were not as fortunate as myself or my siblings to experience formal education so were determined to provide these opportunities for their four children. They worked hard as dairy farmers to send us to Māori boarding schools and we all subsequently gained qualifications. Even my parents, who are now approaching their mid-70s, studied later in life.” 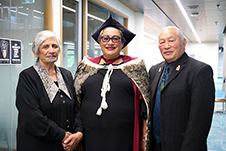 Their efforts have paid dividends for the four children; this year Tangiwai’s youngest sister was made the first Māori woman judge from their iwi (Waikato) after being a crown prosecutor for 20 years. Another sister has a master’s in management studies while Tangiwai’s brother gained a heavy diesel mechanic qualification from Waiariki Polytech (now Toi Ohomai Institute of Technology).

Later in life her parents have also been able to realise the opportunity to study, and last month her mother launched a book based on her master’s thesis from the University of Waikato about weaving from her iwi’s perspective. This has extra significance because one of her mother’s harakeke capes was bought by Otago’s Te Huka Mātauraka Māori Centre and is worn on graduation formal occasions, and more recently, when doctoral students hand in their thesis, Tangiwai says.

After a lifetime as a dairy farmer, her father was able to complete a certificate in Social Work at Te Kuratini o Waikato, Waikato Polytech.

In addition to being a Te Tumu faculty member since April 2008, Tangiwai’s research interests include te reo me ngā tikanga Māori, Māori Education and Māori Pedagogy.

Her PhD investigates intergenerational knowledge transmission and pedagogy from the late 1800s until the present, and their place in today’s learning environments; particularly from a Waikato Tainui perspective about practices associated with the Kīngitanga (King Movement). She is busy implementing one of the translational priorities of her PhD research, Tuupuna Times, which encourages whaanau to record the life stories and narratives of their ruuruhi (elderly women) and koroheke (elderly men). Meanwhile she has continued to teach her Māori education focused papers MAOR 213, 313 and 413.

From January 2019 she will commence a 0.5 Academic Dean Māori position in the Division of Humanities, in addition to being the new Co-chair of Poutama Māori, the Māori academic staff network across the Otago University campuses, which she took up in September 2018.

She also expects to conduct comparative research with two other New Zealand iwi and two other indigenous tribes from Northern America related to her PhD study during her pending Research and Study Leave forecast for late 2020 and early 2021. 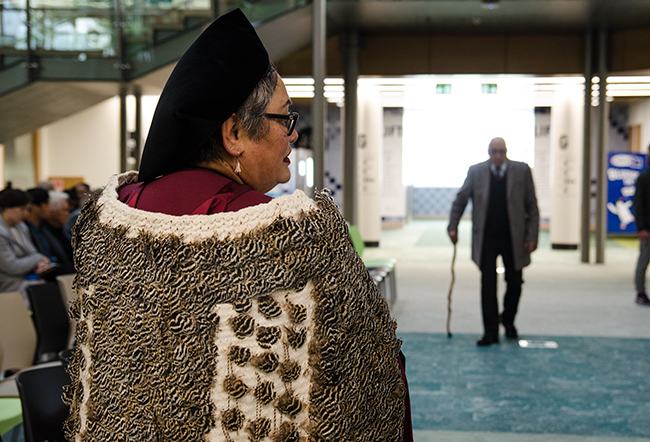 What drew you to your PhD subject area?

I have been involved in the Māori education field throughout all of my three careers in the primary school sector, The Ministry of Education and now the tertiary sector. This particular subject was an area chosen in discussion with the then Education team and advisers from my iwi, the Waikato Raupatu Lands Trust (WRLT) back in 2008.

As part of giving back to my iwi for all the support I have received on my journey into higher education over the years, once I decided on pursuing PhD I asked if there was an area they needed researching. They were interested in Traditional Knowledge Frameworks from the eight old houses of learning held across the Waikato/Tainui region, and whether there were any connections to the way learning occurs today that could be of use to modern day learners across the education spectrum.

I chose to look at how knowledge was transmitted by my participants inter-generationally in their roles associated with three domains on the marae during any of three key Kingitanga events of riikata (regatta), koroneihana (coronation) or poukai (monthly tribal forum held at various, participating marae) .

What key learnings will you take from your PhD into future research or teaching?

A key finding was what I ended up calling the study – Titiro Whakarongo-Look Listen. He huarahi ako noo ngaa raa o nehe. A way of learning from days past.

This way of learning has endured through the years and featured prominently as to how my participants learned their roles, much in the way students of the old whare waananga learned as well.

Six recommendations were made and I have been pursuing one in earnest, Tuupuna Times, about the importance of capturing the life stories of the elderly, ruuruhi and koroheke, over the past six months. The research project has certainly been informing my teaching the entire time and resulted in five related publications.

What findings or discussion from your work would you like to discuss with Māori (and others) in a non-academic setting?

A key message from Tuupuna Times relates to the importance of recording your life stories before succumbing to dementia or simply passing away before sharing that knowledge. This relates back to transmitting your knowledge of the learnings you have gained in your lifetime, how you learnt that knowledge and who you will pass that knowledge on to.

" Research informed teaching is very important to me and I use the experiences and new knowledge and information or examples I gain all the time as learning experiences to talk about with my students where possible. This includes bringing guest speakers into my classroom to talk about new research, or simply taking the students out to the ‘classroom’ if need be, off campus, such as Te Kura Kaupapa Māori o Ōtepoti to implement what we have just been learning about in the classroom...."

What are a few personal values/ experiential factors that guide your research and/ or teaching? Is there something in your personal, professional or family history that has guided your work?

The hard work and sacrifices my parents made to ensure we all gained an education; my brother went to Wesley College for two years, then returned to Taupō-nui-a-tia College (my father actually won a scholarship to Wesley but my grandfather pulled him out after his first year to work the farm at Waikaretu) and us three girls went to Queen Victoria School for Māori Girls in Parnell Auckland. My two sisters went on to finish at Wesley College as well, and ending up on exchange, one to Japan and one to Finland. My parents’ efforts led to my brother Kenneth completing his Heavy Diesel Mechanics course at Waiariki Polytech in Rotorua; my youngest sister Tini being made a district court judge in August at Manukau District Court and the first Māori woman judge for our iwi; my sister Vanessa completing a Masters in Management Studies at Waikato, and now my completion of my PhD at Otago. My mother, who came to Waikato to do a Bachelor of Education at the same time my youngest sister started her law studies, has now completed an MA and just launched her book based on her studies. This meant my dad had to sell the farm at Atiamuri – we had moved there in 1973 – and he came to Hamilton and finally got to study, completing a certificate in Māori counselling, Te Whiuwhiu o Te Hau at Te Kura Tini o Waikato (at Waikato Polytech).

Can you describe sharing this graduation experience with your whanau?

Eight of 15 of my research participants have passed away. I could not bring all representatives of the families here so will need to stage a special celebration for those whānau at my marae in early 2019 to honour the significant role they played in this project. It has been hugely important to me to mark this occasion with my whānau who have travelled: my parents and sister, my mother in law and two sister in laws as well as my husband and two daughters, grandson and new granddaughter.

I also acknowledge my Dunedin whānau from my 15 years living here-those who are kin by whakapapa and those who are kin by association and have supported me from day one on this journey – the local kura and kōhanga reo, rūnaka, BOM, te reo and tikanga whānau, Māori organisations, my former colleagues at the MOE, my Ministry of Primary Industries (Fisheries Officers) whānau, my whole of University whānau: the miro Māori as well as support services and academic colleagues, and Te Kura Matatini whānau. Last but not least, my iwi groups. This is not a solo effort. It has been my privilege to tell the stories of many, I just hope I have done those voices justice.

I always take comfort in the words of one of the participant’s, my late grand uncle, Te Motu Iti O Rongo Mai Te Hoe Katipa, “E oi i a koe, e oi i a kōrua, e oi i a koutou”.

"Take care of yourself, yourselves, (two people), yourselves (three or more people)". 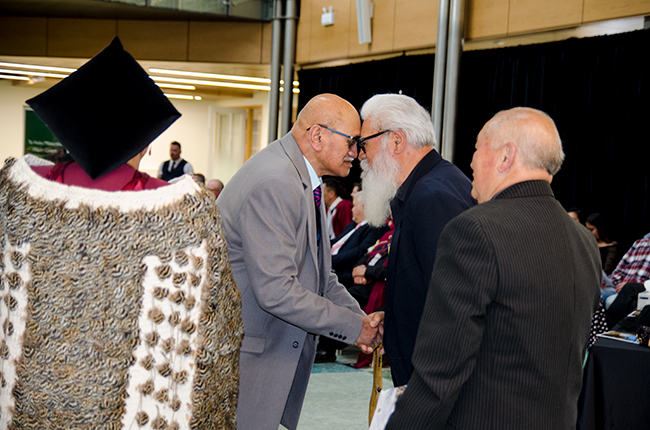 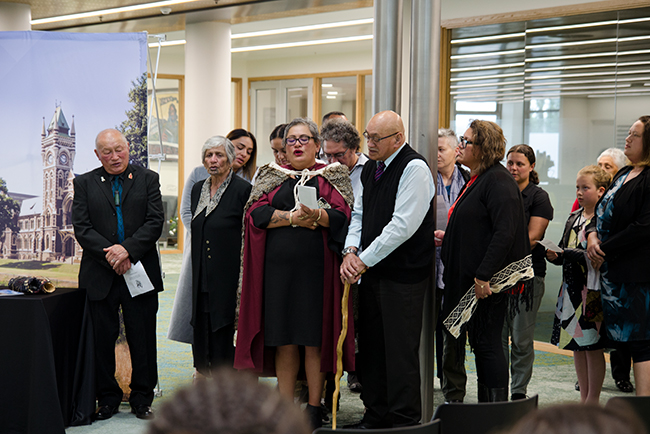