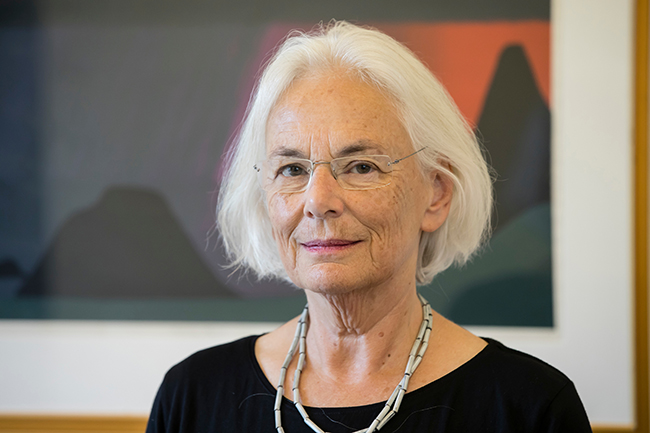 Bridget Williams, the founder of New Zealand’s leading specialist non-fiction press and alumna of the University of Otago, received an honorary Doctorate of Literature on 18 May.

Bridget Williams (ONZM MBE) is considered a hugely influential figure in New Zealand letters and publishing, and an outstanding graduate of the University of Otago, where she completed a Bachelor of Arts.

Ms Williams spoke at the 18 May graduation ceremony at the Dunedin Town Hall, and urged 260 graduates in arts, humanities and applied science to learn more about their own country because that is "critical to understanding our future".

Whatever "unforeseen trajectories" their lives took, she hoped graduates would "remain curious, simply seeking to know what is there".

"Or rather, what is here. For knowing this place - its land, its people, its past - is critical to understanding our future here in these South Pacific islands, here in the world." [Read the Otago Daily Times article here].

Her initial foray into intellectual life was in Oxford as a research assistant to literary scholars Dame Helen Gardner and Richard Ellmann. After a stint at Oxford University Press in the UK, Ms Williams returned to New Zealand in 1976. She worked initially for the New Zealand branch of Oxford University Press, where she helped shape what would become the Oxford History of New Zealand, a volume that marked the coming of age of New
Zealand historical scholarship.

In 1981, she struck out into independent publishing, founding Port Nicholson Press in Wellington. Taking this small New Zealand firm into multi-national ownership with Allen & Unwin Australia in the mid-1980s, Ms Williams became the managing director of Allen & Unwin New Zealand. In that capacity, she established a publishing partnership with the multi-volume Dictionary of New Zealand Biography as well as important scholarly works such as Claudia Orange’s The Treaty of Waitangi.

In these years too, her publishing reflected the new engagement with feminist writing, and she had a key role in establishing the nationwide Listener Women’s Book Festival.

In 1990 she established Bridget Williams Books, a press that has risen to become New Zealand’s leading specialist non-fiction press. She has worked with New Zealand’s leading social scientists and humanities scholars, producing a large number of award-winning volumes. Significant amongst these has been a commitment to works on Maori history, with the landmark Tangata Whenua: An Illustrated History by Atholl Anderson, Judith Binney and Aroha Harris published to acclaim in 2014.

In recent years the BWB Texts Series – short, moderately-priced volumes – have catalysed public debate over a range of pressing cultural and political issues.

Hugely respected in the world of publishing, Bridget Williams has played an integral role in facilitating public conversations in New Zealand, its history, identity and politics, she has been extremely influential in shaping New Zealand intellectual life and cultural debate.