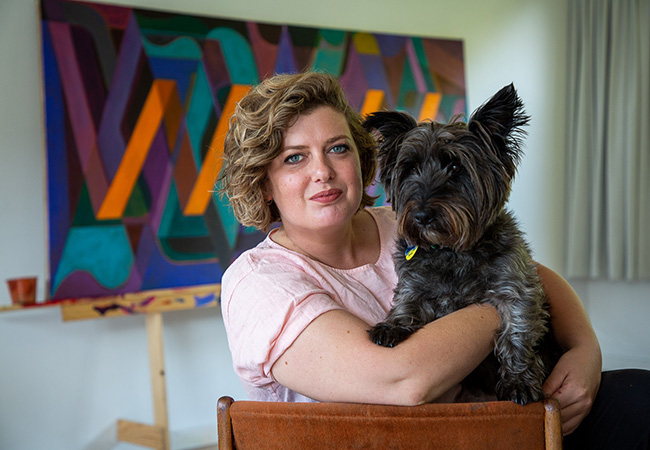 Artist Imogen Taylor hopes her latest exhibition will help the public engage with queer histories that have long been hidden, as she prepares to unveil a year’s worth of hard work.

The Whangarei-born artist will celebrate the completion of her year as the 2019 Frances Hodgkins Fellow with her first significant South Island solo exhibition, ‘Sapphic Fragments’, opening at Dunedin’s Hocken Collections Uare Taoka o Hākena on February 1.

The annual 12-month fellowship provided by the University of Otago includes a studio, office space and a salary.

It’s been an eventful year for Taylor, who moved from Auckland to Dunedin with her partner, Sue Hillery, and beloved dog ‘Dusty’ to undertake the fellowship.

Not only did she work full time in the Frances Hodgkins studio, but she was also named an artist to watch at Art Basel Hong Kong, and produced both a website and a new issue of ‘Femisphere’, a zine founded in collaboration with Judy Darragh that encourages conversation around geographically diverse female* artists.

However, as she embarked on the year she was nervous about fulfilling the task ahead, she says.

“I felt like a year was a really long time, but it ended up going far too quickly.”

The fellowship means she has been able to commit herself almost entirely to her practice, a stark contrast having to support herself with several part-time jobs in Auckland.

“It’s given me much more confidence and commitment to being an artist, which isn’t always a given when you’re a queer woman artist - there just aren’t as many role models for us at the top of their game.”

But her time in Dunedin is drawing to a close - Taylor leaves in February for a six-month residency at the International Studio and Curatorial Program in Brooklyn, New York.

She will then travel to Europe before having the first monograph of her work published later in the year.

Taylor’s new exhibition ‘Sapphic Fragments’ explores threads of research, hidden histories and new narratives she has been exploring over the past year.

“The light in Dunedin is so different to the west coast of Auckland where I was previously working, it tends to saturate colours a lot more,” she says.

While the exhibition title acknowledges Greek poet Sappho’s fragmentary and fabled existence in contemporary society as symbolic of queer histories across time, ‘Sapphic Fragments’ examines modernism through the lens of sexual identity.

The exhibition balances Taylor’s interest in modern art movements such as cubism, abstraction and regionalism to explore natural collisions between art and queer theory.

While queerness in this context functions as the perfect medium to interrogate the material history of painting, it also subverts the historically straight status quo.

Taylor often plays with the very structure of the canvas, de-straightening and creating slanted moments of disorientation that frame these multi-dimensional investigations.

“I hope the public can engage with queer histories in a sense, they’ve been hidden for so long that it’s now urgent we consider them and how they’ve actually shaped so much art we’ve come to know,” she says.

“So many queer practitioners have either been closeted or claimed as straight. More visibility and recognition of LGBTQIA+ people and their careers can provide the art world, and ultimately the world with so much sustenance.”

Accompanying Taylor’s new works will be a large-scale wall painting made in collaboration with partner Sue Hillery, and a series of historical paintings from the Hocken’s Pictorial Collection by artists Frances Hodgkins, A. Lois White and Dorothy K. Richmond.

“I’m really proud of everything and how it came together, but mostly I’m super happy with the wall painting design that Sue and I collaborated on, and the beautiful catalogue that accompanies the show, with writing by Joanne Drayton and Milly Mitchell-Anyon and designed by Ella Sutherland,” she says.

“The wall painting fills the space and it’s the first time I’ve presented something like this in one of my exhibitions. The catalogue published by the Hocken is also the first major publication to document an exhibition of my work.”

Hocken Head Curator Robyn Notman says it’s been a “pleasure and a privilege” to have Taylor undertake the fellowship.

“Imogen has flourished as the Fellow – she quickly adapted to living in Dunedin and to being on campus - and she lost no time getting underway with her painting, making new work, testing out compositional elements in addition to colour, scale and texture.”

Recently she has been the recipient of a McCahon House Residency (2017) and the Wallace Arts Trust Paramount Award (2018).

This was initiated by Dunedin-born Jewish cultural benefactors and established by the University of Otago Council in 1962 to aid and encourage artists, while at the same time associating them with the life of the University and fostering an interest in the Arts within the University.

Named after Frances Hodgkins, one of New Zealand's most distinguished painters and also Dunedin-born, the annual 12-month fellowship provides a studio/office space and not less than the minimum salary of a full-time university lecturer.

It is open to artists who are normally resident in New Zealand and who, in the opinion of the Selection Committee, have executed work that demonstrates their talent, and would benefit from holding the Fellowship.

At the beginning of each year, Hocken Collections celebrates the outgoing Frances Hodgkins Fellowship by hosting a solo exhibition of new art work produced over the course of the Fellow’s year. These exhibitions are a highly anticipated aspect of the annual Hocken exhibition programme, and are an opportunity for the Fellow to conclude and acknowledge their yearlong engagement with Dunedin’s close-knit creative community.

*Femisphere firmly believes the terms female/women/she/her to be inclusive of all variations of gender/gender-ambiguous/non-binary who may identify with them, whether it is in the past, present or future.