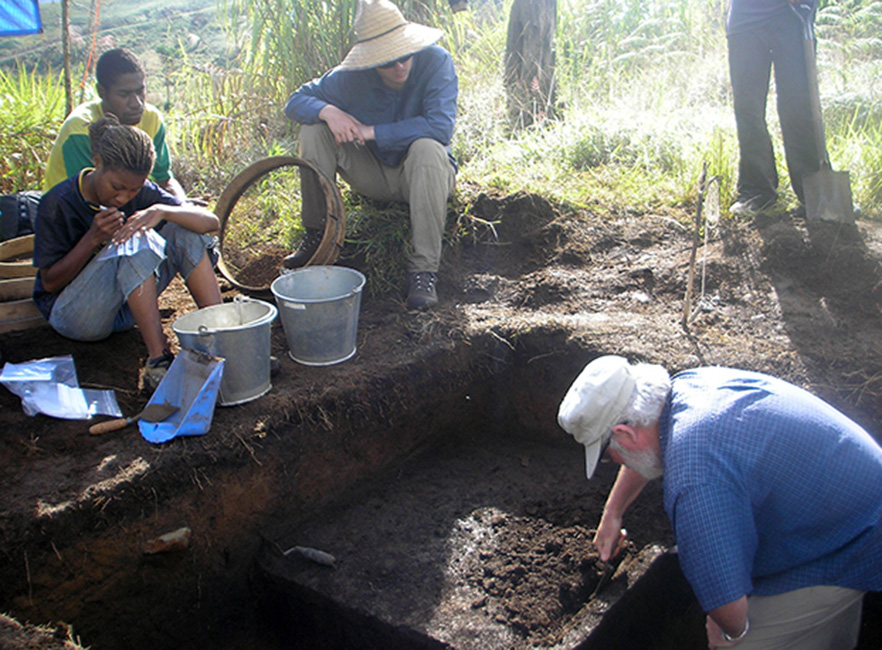 Professor Summerhayes and members of the dig team.

New research has ended decades-long speculation about what ancient Papuan New Guineans ate, and how they processed food, in the highlands of New Guinea several thousand years ago.

Findings from the “Joe’s Garden” site in the Ivane Valley in the New Guinea highlands ends several decades of academic speculation about what a formally manufactured mortar and other tools were used for, and shows a variety of once widely eaten starchy plants were processed at the site.

“Although ground stone bowls, known as mortars, have been found throughout most of New Guinea, little was known of their function or age. Most have been found from surface collections or dug by in and re-used by locals while gardening. Only a couple had been excavated in archaeological contexts and their use was unknown. This paper presents the discovery of a mortar fragment excavated from the Ivane Valley of Papua New Guinea in contexts dated to four and a half thousand years ago.”

Clinging to the stone tools recovered from the site are microscopic starch grains from tree nuts (Castanopsis acumeninatissma) and Pueraria labota (tuber), which were first proposed as common stables by researchers in the mid-1960s.

“Usewear and residue analysis on the fragment has shown it was used for processing starch rich plants such as nut and tuber, and insights into past subsistence patterns are rare, especially for 4,400 year ago!”, Summerhayes says.

The research adds to the findings from other studies by demonstrating the long-term survival of starchy residues in an open site in a montane setting at 2000m above sea level, and confirms the resilience of these microfossils in equatorial/tropical contexts.

Summerhayes says over the last 300 or so years, the predominance of sweet potato in subsistence gardening practices has led to a range of starchy plants falling into disuse. While previous studies in the region have mainly focused on the use of taro, banana and some yams, the researchers found several species, including Castanopsis sp. – commonly referred to as chinquapin or chinkapin – may have played an important, if up until now an invisible, role in highland diets over the millennia.

Similarly, the widely available, C. acuminatissima – commonly known as white oak or New Guinea oak – has been recorded as eaten on hunting trips but has never been clearly identified as a common starchy staple. As with pestles from the Waim site, the Ivane mortars confirm consumption of these tree nuts was widespread.

Some areas recognise these dietary links with the past; in the highland Kaironk Valley in Madang Province at least one stand of C. acuminatissima has conservation status.

“This regional example is an exciting addition to our wider project on understanding of the trajectories of diverse plant food exploitation and ground stone technology development witnessed globally in the Holocene,” Summerhayes says.