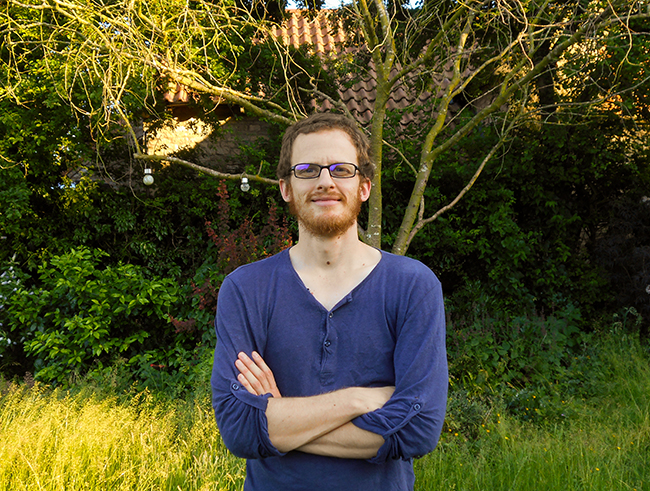 Although stranded half a world away new Politics programme lecturer Dr David Jenkins is excited about calling Otago home.

Until Covid-19 travel restrictions are lifted Dr Jenkins will remain in the UK but will teach a 100-level Politics paper remotely in semester 2.

“I am really looking forward to starting the Basic Problems [POLS 101] paper. We are going to cover about 12 thinkers in all, including Machiavelli and Rousseau, both of whom I admire enormously. I am also integrating a week on the political theory of slave narratives which I have planning for a while, building on my long-term interest in James Baldwin.”

“I am really keen for it to all come together for the students, and I am trying extra hard in light of my being 18,000 km away.”

Since 2017 Dr Jenkins has been a postdoctoral researcher in the University of Warwick’s philosophy department, and before that was a Teaching Fellow at University College London. In 2015 he was the Krzysztof Michalski Junior Fellow at the Institute for Human Sciences in Vienna.

He wants to build on his recent research into homelessness and council housing, and focus on affordable housing.

“I read an article on Auckland's 'turbocharged’ housing market, and I know Ardern's climb down over capital gains tax had a lot to do with land-banking and housing. London is similarly wracked by housing issues – I think the ideas, and the culture, surrounding home ownership can get quite ugly.”

Cities such as Vienna – voted the most liveable city in the world, and where about half of the residents rent from the state – provide examples of how affordable housing provides maximum benefits.

“Some of their council houses, such as Alterlaa and Karl Marx Hof, are absolute masterpieces of civil engineering – they've got swimming pools on the roof. In New Zealand, and in the UK, renting from the state is regarded as appropriate only for those in emergency need. And I think that’s a shame.”

He is also exploring the logistics of a project on partisanship and its connection to political friendship, and would like to connect with Amity (the journal of friendship studies) which is co-edited by Dr Heather Devere from Otago’s National Centre for Peace and Conflict Studies.

Before entering academia, Dr Jenkins worked for Southwark Council for a year. He describes the experience as “incredibly formative”.

“I'd always been on the outside of politics, either studying or as an activist, and had never seen the guts of this beast. One of the most shocking things for me was just how little the council could do to help homeless people, which takes its toll on the people working there. Unless you're in priority need, unless you're pregnant, or under 18, or with children, you're basically on your own – I found this very difficult.

“People would come in with substance abuse issues but if they didn't pass a threshold they could be turned away. This was during the time of the so-called ‘swingeing cuts’ and the start of the ideological assault on ordinary people that was austerity, so it has only gotten worse.”

At the time in Southwark there were 17,000 people on the council’s housing waiting list.

“That's a lot of people who are never likely to own, desperate for secure tenancies and a reliable landlord. So housing, and urbanization generally, are things I want to keep exploring. I think New Zealand offers an interesting laboratory on both these issues.”