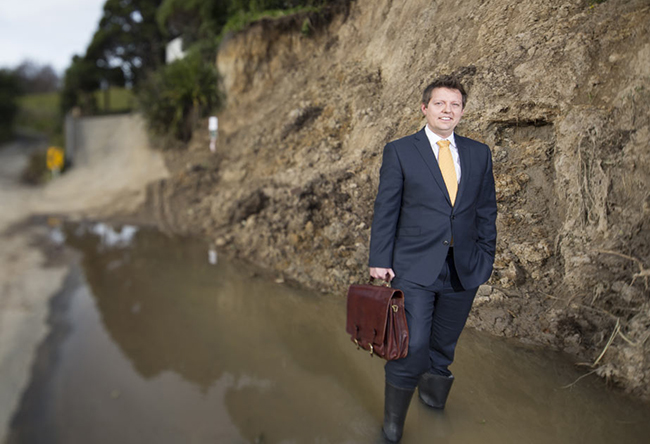 Report co-author and University of Otago Faculty of Law academic Dr Ben France-Hudson says receiving the award was both “validating”, and acknowledgement of the importance discussion on how the RMA affects communities living in at-risk coastal areas.

Dr France-Hudson provided legal analysis for the GNS Science-backed report Reducing risk through the management of existing uses: tensions under the RMA, which was produced with Emily Grace (GNS Science) and Margaret Kilvington (ISREF – Independent Social Research, Evaluation and Facilitation).

“Writing sections together was time consuming, but the collaborative approach was very rewarding and combining expertise from legal, planning and social science disciplines led to key insights and our practical recommendations,” Dr France-Hudson says.

The researchers interviewed RMA practitioners, analysed RPS documents and the planning system under the RMA and applied legal analysis to better understand the tensions between managing existing uses and reducing risk to existing developments under the RMA.

The interviews identified uncertainty among local government officers about how the legislation translated into planning and policy decisions. This could lead to a reluctance to raise the option of managed coastal retreat with communities and meant it was unlikely local governments would be proactive in managing existing land uses to reduce natural hazard risk.

“My sense is that local government is very aware of the issues raised in the report and very keen to get some direction about how they ought to be responding to the risks of climate change. Many councils have started taking concrete steps (to the extent that they can), although I think many of them would also like further direction from central government,” he says.

The researchers say the protection of existing uses is so entrenched in planning practice that modifications, even to reduce risk to lives and property, face significant challenges. A recent example in Matatā in the Bay of Plenty involved a protracted effort by Whakatāne District Council to manage retreat from the Awatairariki fanhead, which was affected by a devastating debris flow in 2005.
Dr France-Hudson says these discussions are of increasing national and local importance.

“At Waitati, north of Dunedin, we have already seen some of the consequences that might accompany increased sea levels and the risk of constant flooding, and it’s widely acknowledged that South Dunedin is likely to be exposed to the risk associated with rising sea levels.”

The authors make a number of recommendations for improvements in practice, and to the RMA itself, that would better enable local authorities to reduce risk to existing communities, but Dr France-Hudson says the Covid-19 pandemic may have removed any sense of urgency around these discussions.

“Prior to Covid-19 I would have said that there was a great deal of momentum and a broad acknowledgment of the issues New Zealand is facing as a result of the increased risks associated with climate change. Of course, as with everything else, this became dead in the water when the pandemic hit.”

“Whether or not the momentum is re-established will depend a lot upon the policy choices made in responding to the fallout from Covid-19. On some levels now would be an excellent time to decide how we are going to address the risks of climate change. After all, we have seen what widespread risk can do to the country and the economy.”

The lockdown has also underscored the power of government to change the way we live, “providing of course it has the social licence to do so.”

“However, I am concerned that climate change, while posing a similar sort of existential threat to Covid-19 will be side-lined in the rush to get the economy going again. This would be an opportunity lost.”

Dr France-Hudson says that under the current regime the RMA could be used to prohibit people from using their land for its existing residential use, and may also make it possible that these rules be imposed without compensation.

“While this might be technically possible, any widespread imposition of such a scheme is likely to be politically unacceptable. This raises the question of what a principled compensation scheme for the consequences of climate change would look like and this is a question I am very interested in looking at more closely.”

The report, which as primarily funded by the Resilience to Nature’s Challenges National Science Challenge, can be read here.