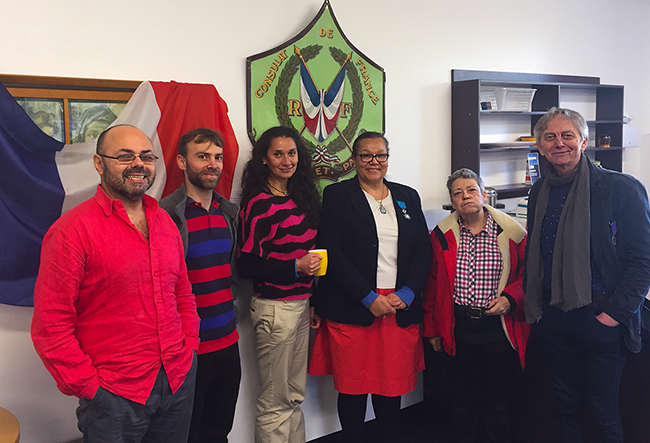 In addition to excellent pastries and crème caramel, Otago’s strong French connections were also on display in the Arts Building on 14 July as Languages and Cultures staff and guests celebrated Bastille Day.

French programme Teaching Fellow and Honorary French Consul in Dunedin Dr Christiane Leurquin had festooned the common room with French tricolour flags, a coat of arms and information about Dunedin’s relationship with France. Many of the items dated from the formal establishment of the Honorary Consulate in the late 1870s.

Dr Leurquin, who has been Honorary Consul since 2007, has a painted coat of arms, a worn stamp of Marianne, and a brevet which were presented to the first Consul, Percival Neill, when the position was created in 1878. 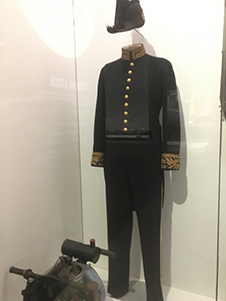 At the time about 55 French citizens and their families lived in Otago and on the west coast, but by 1914 only “Ladies Tailor” Jean Louis Raoul Bellugue and Julie Gabrielle Bellugue were recorded as French residents in Dunedin. Also in Dr Leurquin’s possession is a fragile satin flag, featuring the Cross of Lorraine, which was handstitched by the Bellugue’s granddaughter during World War Two and placed in the consular box.

Sydney Neill succeeded his father from 1918 until 1944, and in 1962 Major Dermot Neill, the father of New Zealand actor Sam Neill, took over the consular agency from AN and MH Haggitt. Like his father and grandfather, Major Neill was honoured by the French government for his long service.

He was succeeded by Dr David Fenby, and Otago English Professor Emerita Jocelyn Harris held the position between 1997 and 2007.

Dr Leurquin studied history at the Université de Paris I (Panthéon-Sorbonne) in Paris and completed a doctorate in 1992 on the history of the Kanak population. She says Bastille Day provides an opportunity to reflect on the ongoing relationship between France and New Zealand.