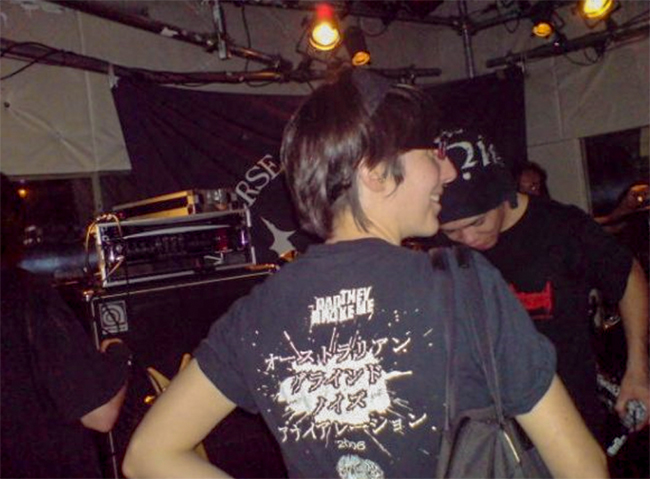 Dr Overell at a Infernal Revulsion gig in Japan

A chapter on gender and musical subcultures in Japan by Media, Film and Communication lecturer Dr Rosemary Overell, recently published in the “The Routledge Companion to Gender and Japanese Culture", looks beyond the extreme metal scene to consider dynamics in other genres, including reggae and hardcore punk.

“My background is in cultural studies of Japan and I have written a monograph about grindcore and death metal music and gender in Osaka (Palgrave 2014) and material on how the metal scene in Nagoya works as a welcoming space for Brazilian-Japanese migrants, so this chapter is a continuation of, and expansion of, that research.” 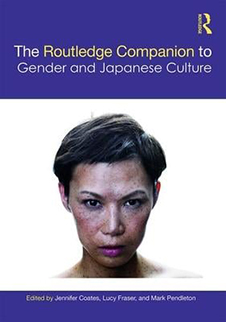 For this book, I expanded my scope to look beyond the (very small!) niche of extreme metal subcultures in Japan, to consider the gendered dynamics of other subcultural formations, including reggae; hardcore punk and mod aficionados.

My work – as is the broader focus of the edited collection – disrupts Anglophone and Western stereotypes about how gender circulates and operates in Japan. People often think that Japan is all about ‘cute’ girls and ‘samurai’ (or ‘otaku’) boys. Of course – like any culture – #itscomplicated and more nuanced than that! Subcultural spaces offer a complex site for the constitution of gender in ways that may be startling for Western readers expecting ‘kawaii’ (cute’). For example, women’s participation in the dancehall / reggae circuit provided an opportunity for self-empowerment through em-ceeing and dancing. In extreme metal, too, women were unabashed in their moshing and participation in performing and making music.

While addresses gender and musical subcultures in Japan, and you consider the usefulness of hegemonic approaches to subcultures to the Japanese context – why was this?

In this chapter I do use the word ‘subculture’ (the editors requested I use this lens) – though I have reservations about this phrase! My book goes into this in more detail, but I do think it is a useful way of thinking through how cultural formations – often youth cultures centred around music – might offer a counter to hegemonic or mainstream culture.

In the cases I discuss in this chapter, enthusiasts of metal, hip-hop, reggae, punk and mod carve out spaces for identities which potentially resist, or at least provide alternatives, to dominant Japanese social expectations. This is through formal or aesthetic elements – the music is certainly not ‘pop’ – but also through its ‘attitude’ and, even, politics – particularly in the punk scene. For example, crusty punks in Japan are usually also involved in social activism, such as Food Not Bombs and the anti-nuclear, and anti-war movement.

Why did you focus on the four key musical subcultures – hip hop, mod, reggae/dancehall, and metal and punk – and what do these genres offer Japanese women subculturalists who want to push against gendered norms in radical ways?

I focused on hip-hop, mod, reggae, metal, and punk because there is some literature already written on these subcultures. I have particular knowledge about metal and punk, due to my previous research, where I conducted two years of fieldwork in Osaka and a few months in Nagoya.

Obviously, it depends on the subculture as to how women work through, and work out, their gender. As I mentioned – punk, particularly crusty and hardcore (rather than Oi! or ‘spiky’ punk) was more committed to a broader activist politics which allowed women more agency. On the other hand, extreme metal and hip hop remained hierarchical with men usually dominating things like running livehouses (venues) and labels.

Women certainly moshed and played in bands but were less likely to be decision-makers or able to go ‘pro’ (to make a living from music). Reggae provided an interesting contrast because women’s ‘liberation’ through em-ceeing and dancehall ‘queening’ was folded through an arguably problematic fantasy of ‘black’ or ‘Jamaican’ women as ‘more authentic’ or ‘bodily’ than Japanese women. You can see how complicated it gets!

The chapter ends with a provocation about how signifiers of Japanese subculture (particularly regarding hip-hop) have been taken up in the Western context as a means for destabilising Western masculinities – what are some examples of this?

This was the part I found most interesting about writing this chapter. I delivered a paper on Swedish ‘sad boi’ rapper Yung Lean at the trans/forming feminisms conference (https://noblogs.org/members/transformingfeminisms/ ) in 2015 and started thinking about how he, and other ‘sad’ male musicians in the West take up Japanese music and its signifiers.

I also taught about this in my paper Digital Asia (now sadly, discontinued) in 2016 and 2017. Lean arguably presents a non-normative type of masculinity – particularly in rap and hip-hop (at least when he debuted). He’s melancholy, sensitive, vulnerable and ‘turned down’; he partly forms this identity through an appropriation of ‘Japanese’ signifiers – references to Nintendo; kanji etc. He’s also done collabs with Japanese hip-hop artists. It’s interesting to wonder whether Lean is forging a new type of masculinity through this appropriation or whether he’s reproducing Western cultural stereotypes about Japanese men as ‘emasculated’. It’s notable that while songs like ‘Yoshi City’ (a sad fantasy about nodding off whilst playing Mario) certainly work as ‘feelings’ rap, his collabs with Japanese rappers MONYPETZJNKMN (MonyHorse; Junkman and PETZ) is a more ‘aggressive’ hip hop track with plenty of macho flexing.

The importance of thinking critically about how popular culture works as a site for everyday politics.

You’re interested in Japanese culture and how popular culture and media intersects with social politics.