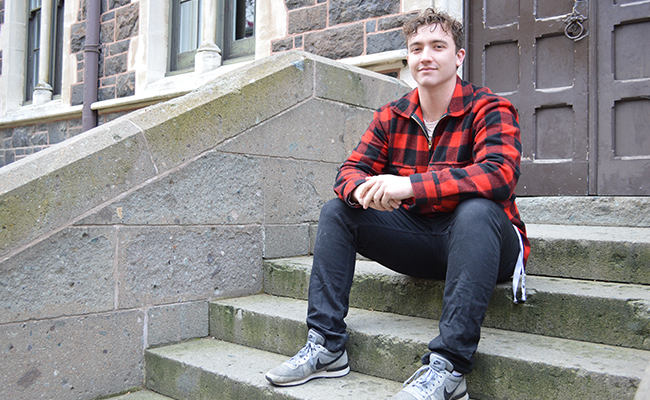 Robert Griffith thinks his time at Otago will make him a better politician in the long run.

Robert graduated with a Bachelor of Arts in Philosophy, Politics and Economics (PPE) in absentia on 29 August.

A youth politician and activist, Robert has always had an interest in history and wanted to dig deeper into the ideas and concepts that have made that history.

“It’s a degree that puts a lot of history in context and puts in context modern politics as well.”

The 21-year-old grew up in Rotorua in a family which he describes as “not very political”, so his full political education comes from his time at Otago. He also joined the Politics Students Association (POLSA) during his time at the University.

“I think it’s one thing to learn about institutions and history but it’s another thing to go out and change it. PPE gives you the tools to go out and make that change. ”

Some of the changes he wants to make include making tertiary education and healthcare free and improve the mental health system to have a more open understanding of mental health.

Mental health is an issue Robert has taken a great interest in. He joined LifeMatters Suicide Prevention Trust and began serving as a trustee in 2019, as well as working as a peer support worker and hosting their radio show on Otago Access Radio.

LifeMatters was formed in July 2014 to help support and give a voice to families bereaved by suicide and those that are suicidal.

“This is such a silent sector to the workforce. No one talks about how they are doing.

“It’s an important issue. The whole mental health space could be so much better. I didn’t learn a lot about suicide or mental health in first year.”

Being a trustee also gives Robert some experience in a governance role, something he thinks will be beneficial to his career as a politician.

That career has already begun as Robert joined NZ First last year. He envisions himself making it to Parliament some day, but for now he is not sure of his next step.

“Ultimately, if you want to make change and you have the skills to do that then going into government makes sense.”

Robert’s time at Otago has driven his political ambitions and he encourages others with an interest in the area to consider studying PPE as well.

Since graduation was cancelled, Robert instead spent the weekend celebrating with his family.