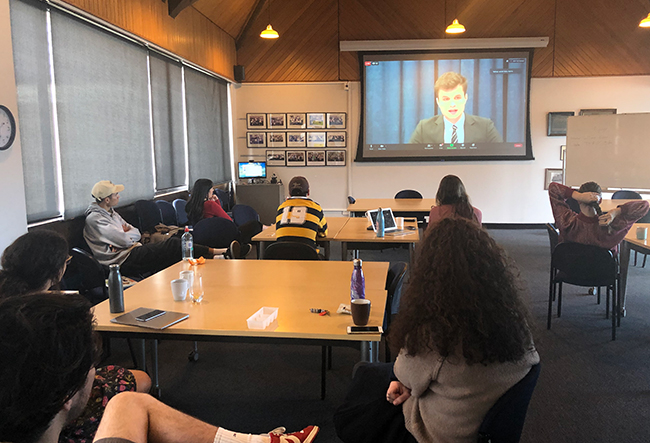 “Court-ready” was the consensus among the judges of this year’s National Kaupapa Māori Moot competition, before declaring Faculty of Law student Jacobi Kohu-Morris national winner.

The competition, run by Te Hunga Roia Māori (THRM) as part of its annual conference, sees students from around the country covering a wide range of legal issues relevant to Māori in moot-style competitions in front of sitting judges.

Jacobi (Ngāi Te Rangi, Ngāti Awa, Ngāti Ranginui) says the event was to be held at the University of Waikato, but due to COVID-19 it was run online. 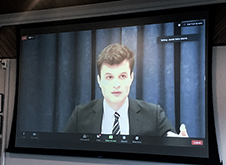 Jacobi during the competition

“It’s usually called the Hui-a-Tau but this year, because it used Zoom, it was our “Zui-a-Tau”. We heard some awesome kōrero, especially on the Ellis v R case, currently before the Supreme Court, which promises to be an important case for tikanga, and discussion around deceased peoples’ rights and mana, going forward.”

The decision was challenged for not being “proportionate”; some felt it disproportionately affected Māori, that it was inconsistent with tikanga, and that it was unlawful in failing to consider the Treaty of Waitangi / Te Tiriti o Waitangi.

He submitted on the Treaty issue and argued that the Minister of Health was not required to consider Te Tiriti, because there was no express requirement under the COVID-19 Act, nor could one be implied.

“My argument was that Treaty principles would not be supported by the Act’s purpose, because they might slow down the Government’s ability to act strongly (and often rapidly) to contain COVID-19 if the Minister had to, for example, consult Māori, or make decisions in partnership with iwi.”

He also argued the Treaty principles supported the Government being able to act strongly. The active protection principle is particularly important considering the historical effect of the Influenza Pandemic in 1918, during which Māori mortality rates were eight times that of Pākehā.

“My personal views on whether the Minister should have considered Te Tiriti may be different, but it’s a lawyer’s job to be independent and submit on the law, rather than politics or morality.”

“We had a few glitches during the proceedings. Some, unfortunately, had Zoom break down half-way through their submissions, but on the whole, it was great — although nothing could beat the thrill of being in a real court, before real judges!”

The case was also watched by hundreds of the conference participants on Facebook, including members of Te Roopū Whai Pūtake (the Māori Law Students Association of Otago University).

Jacobi submitted in English but says watching friends from Auckland and Victoria universities submitting in te reo was “awesome.”

Collegiality is a feature of studying Law at Otago and Jacobi says he’s had incredible levels of support from law students and lecturers, including everyone from Te Roopū Whai Pūtake, Nerys Udy (the Tumuaki/President of TRWP), and Professors Andrew Geddis and Jacinta Ruru.

“And it was awesome getting messages from past Otago Māori law students who keep up the whanaungatanga even after they’ve left uni. As the saying goes, ‘E hara taku toa i te toa takitahi. Engari, he toa takitini: Success is not the work of one, but the work of many’.”

Next year Jacobi will be working as a Judges’ Clerk at the Court of Appeal in Wellington.

“I’m not sure where I’ll be after that, but my future with the law definitely involves some more study, and hopefully submitting on a real Treaty or tikanga case one day.”