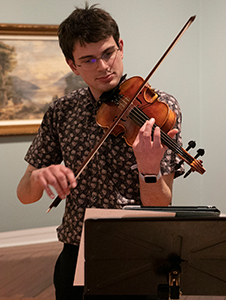 Travelling from Dunedin to Rochester, a city in New York state, is a long way to go for a half hour interview. But that’s exactly what Otago MusB(Hons) graduate Nathaniel Otley did in February, and the journey and the jetlag was worth every minute.

Last month Nathaniel was awarded with a Fulbright General Graduate Award which he will take up at Eastman School of Music in Rochester, studying for a Master of Arts in Music Composition.

“I was really surprised and thrilled to receive the award,” says Nathaniel, who is currently back home in Dunedin (having returned just before the borders closed behind him). “These application processes are very rigorous and intensive.”

To gain his place at the School he had to attend an audition and interview in February, and was competing with a shortlist of people from around the world. “It was a long way to go for an interview, and it makes it a very stressful half hour.”

Nathaniel says he applied to Eastman because of its good reputation and particularly because it has a big performance department.

“This gives me the opportunity to work with amazingly talented performers, which as a composer is always good.”

Nathaniel completed his degree at Otago with a double focus on performance violin and music composition. While he’s hoping to continue to do a little bit of performing and take some lessons at Eastman, his study will be in composition. The two-year course comprises electives in the first year, and an extended composition for his thesis in the second.

"I’m quite excited by the large range of coursework options available for the electives, and also for the extended composition working with a larger ensemble, like an orchestra,” he says.

“This includes looking at how we normally interact with and play instruments, and asking ‘are there other ways we can go about using this instrument to create sound?’”

He says a lot of the benefit of attending Eastman will be the experience he can gain in composing in a different environment, both culturally and academically. He’s also excited to work in such a big music school, with several orchestras and ensembles, including a new music ensemble.

“Being in that creative environment will be really stimulating.”

Nathaniel says his master’s will continue the work he started at Otago, and he is grateful for the opportunities provided by the School of Performing Arts.

He says Otago provided him with a lot of opportunities and challenged him to do really well.

“I was able to get the kinds of opportunities that lead to these sorts of scholarships, I had a lot of help and encouragement to apply for things outside the University, including the NZSO Todd Awards, which provided me with high quality recordings which are important to have for applications.” Nathaniel won the 2019 NZSO Todd Corporation Young Composers Award, with his piece Biosphere Degradation, inspired by the soundscapes of struggling ecosystems and the threat of climate change.

Due to the COVID-19 pandemic, Nathaniel has deferred taking up his place at Eastman until August 2021.