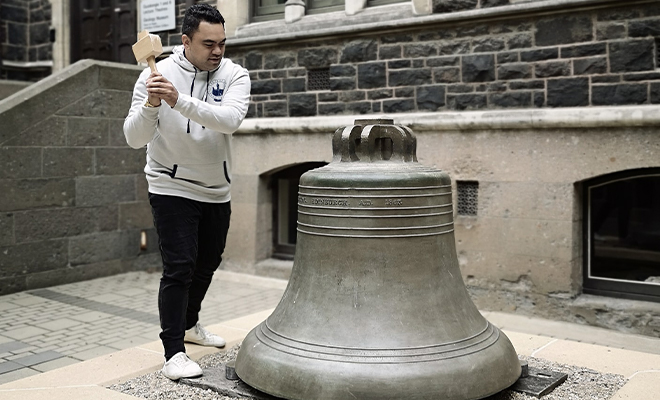 Will Flavell ringing the University Bell.

A strong belief in the transformative power of te reo Māori for all in Aotearoa New Zealanders has guided Education graduand Will Flavell’s professional and educational journey.

“At my previous school [Rutherford College] where I was head of Māori studies, I saw Māori learn te reo Māori because it is their culture and language, but the reasons for others’ learning were not clear, as there was no previous research on the topic.”

“Working alongside other motivated educators and researchers was a bonus. Manaakitanga was strongly embedded in the programme and students of the cohort were able to positively support each other. My supervisors were fantastic. They were knowledgeable and always gave constructive feedback.”

Will is the Education Manager Māori at Comet Auckland - Te Hononga Akoranga, a not-for-profit education Auckland Council controlled education initiative. He has taken many findings from his research into the position, which he started earlier this year.

“My role is to scrutinise educational thinking and practice to do right by Māori learners across Tāmaki Makaurau Auckland. We want to make a meaningful difference for our Māori whānau living in Auckland by working alongside schools, marae, tertiary providers, libraries, and community organisations.

“I can use the skills developed from my doctoral research to achieve equity and excellence for Māori learners across the different sectors, and this challenge excites me.”

He says the research project transcended academia, empowering him to be a positive role-model for the rangatahi Māori in Northland, where he grew up, and for young people in West Auckland.

“If we set our mind to a goal, we can achieve it.”

He is also deputy-chair of the Henderson-Massey Local Board (West Auckland) and uses the role to support te reo Māori use at public domains, by having te reo Māori announcements on public transport and included when naming of parks, reserves, and streets.

His research is dedicated to the many rangatira who have “passed that persisted with ensuring that te reo Māori was there for future generations,” all people now on their Māori language journey, and the whanua and friends who have supported his endeavours.

“My mum was the first person to go to university after having four children. She normalised the importance of higher education for our whānau and the opportunities that come as a result. She always reminded us that our dreams can come true if we have the courage to pursue them.”

Will’s experience as an educator and his EdD research have underscored both the value of making language accessible and the inherent challenge in Te Taura Whiri i te Reo Māori’s goal of having one million te reo Māori speakers by 2040.

“This goal can only be achieved if more non-Māori are learning the language. I took up the challenge of postgraduate research because I am passionate about the revitalisation of te reo Māori and my journey has shown me how all New Zealanders play a valuable role in its normalisation. The students in my research recognised that it is not a matter of being Māori or not, instead, it is most important thing is the value we all place on te reo Māori.”