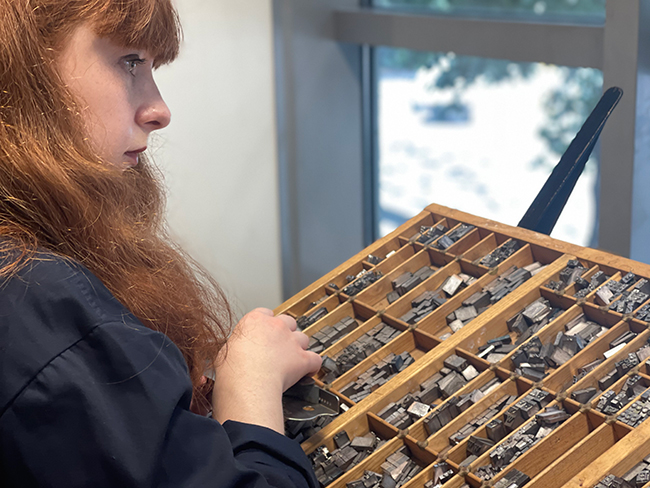 While researching James K Baxter’s notebooks as part of a Humanities Internship English and Linguistics student Caitlin Duff made an important discovery; a cache of poems – including a previously unknown work – by the lauded poet’s father and WW1 conscientious objector Archibald Baxter. 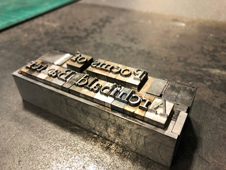 “I recognised the significance of the poems as soon as I discovered them. Although my knowledge of Archibald Baxter was limited, I knew he was not renowned as a poet, so to find the first poems copied into his son’s notebook was really quite exciting.”

“I also had no idea if they’d been found and written about by other people or not, so it was a little thrilling to think I’d found something new!”

The project’s biggest challenge was figuring out which poems were Archibald’s. Caitlin discusses the uncertainty surrounding the attribution of the previously undiscovered In December Days in the explanatory notes of the edited collection she handprinted at Otago’s Otakou Press Room.

Creating a booklet was also a challenge.

"I’d never bound a book or used a printing press, so getting the hang of those techniques was quite a steep learning curve. But I was compelled to take the chance to make these poems readily available to those who want to read them. While the manuscripts of all the poems in the collection are present in the Hocken archives, you have to already know they’re there to find them.”

A copy of Caitlin’s collection can be viewed at the Hocken Collections. 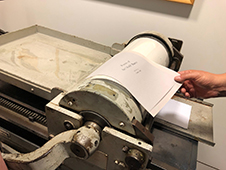 Undated and written in “simple but effective language,” Caitlin says the poems cover a wide variety of topics. An anti-authority tone is evident in the eponymous Gorse, a short verse on being required to clear the weed that blighted many farms:

Beautiful blossoms on needles and pins:
‘Tis the man on the mattock that pays for his sins:
If the men who make laws had their knuckles and shins
All bloody with spikes, they’d know something of whins.

Similarly, To the Chairman and Members of the Taieri Country Council on a “Vexed Question” takes aim at a local authority bent on building a road – “a full chain broad” – right through Archibald's cowshed.

Other poems pay tribute to literary figures, including Robert Burns, or cover pacifism and war; Song of the Shirker explicitly refers to events and politics of WW2. 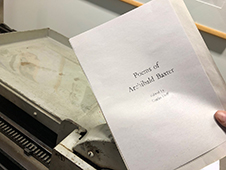 Although most of the works had been discussed in Jennifer Johnston's 2001 University of Canterbury thesis, Caitlin wanted to complete the collection to add depth to our understanding of Archibald Baxter.

"He is mostly known for being James K Baxter’s father and for his stance as a pacifist and conscientious objector [which he detailed in his widely-read We will not cease (published in 1939)]. I think he was a phenomenal man, and to work so intimately with his poetry felt like such a privilege. He seemed like one of those rare, genuinely good-hearted people, and I think those are the kind of people we need to celebrate now.

“Men of the past have taken quite a few blows to their reputations recently. Our modern-day values conflict with the problematic attitudes of their day, so it was so refreshing to learn that Archibald Baxter was just a really good guy, even by our modern standards.”

Caitlin says the key message she took from studying Archibald’s life and works was his insistence that individuals should always make efforts to dismantle systems that cause injustice, and it is possible to re-educate those who are unaware of inequity. 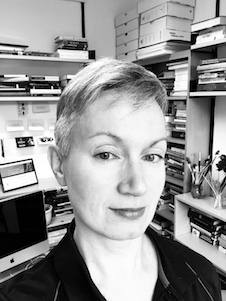 “For Archibald, this applied to soldiers and the military machine during WW1, but I think it’s something we can still apply today.”

English and Linguistics Associate Professor Simone Marshall says Caitlin’s discovery will have a lasting impact on research on the Baxters’ legacy and highlights the value of the Humanities Internship programme.

“The Humanities Internships are an amazing opportunity for our students to really get a taste for workplace environments. And, they learn just how much employers value their critical thinking and communication skills.”