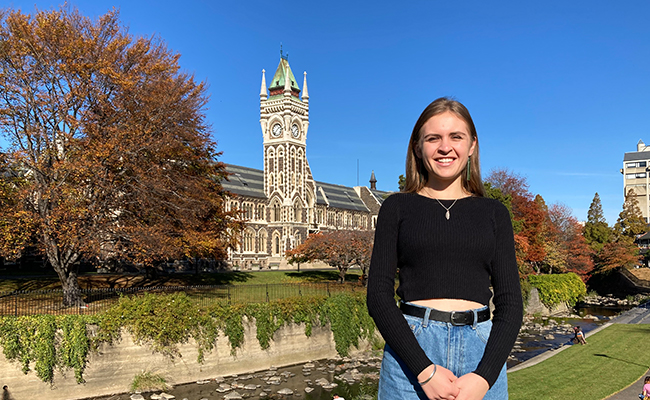 Kaiya Cherrington's journey at Otago comes to a close as she graduates in absentia this weekend.

Kaiya Cherrington’s time at the University of Otago resembles a whāriki, a mat woven with different strands consisting of her academic and cultural journeys.

For the 21-year-old from Whāngarei, who graduates in absentia this weekend, her whāriki has an unlikely beginining.

Kaiya (Ngāpuhi, Ngāti Hine, Te Rarawa) had no idea what she wanted to study while at high school. The only thing she knew is he wanted to help people.

“At first I wanted to do clinical psychology,” she recalls.

“Then I remember a lady from a Ministry of Education school telling me at a regional kapa haka festival that I needed to do educational psychology because all of the old ladies were retiring. I was sold.”

With her academic thread underway, there was another area she wanted to explore: her Māoritanga.

“I grew up in a white Catholic school, so I never had the opportunity to learn anything formally, but I saw it as an opportunity to go to University and study it as my minor. That was always a given.

“My papa is a kaumātua and a minister. He’s the big cheese up north, and that’s what you hear about when you carry the Cherrington name. But my whānaunga didn’t pass anything down to us, any of the knowledge, the reo.

“Even though it would’ve been so much easier if I was raised with te reo as more of a natural language, it was on me to push myself. You don’t take it for granted.”

Her parents travelled down to Dunedin to help send her on her way, but a difficult first year littered with homesickness and inferiority followed. Then she picked up a copy of the University student magazine.

“I remember reading an article by [former Te Roopū Māori tumuaki] Taylor Terekia and that inspired me, because she spoke about her experiences which were very true. I wanted to expand on them a bit more.

Kaiya openly admits the cultural competency at Critic has been fantastic in her time, but admits there is still a need for Māori and Pacific Islands voices at the magazine.

“One of my really close friends is Fijian and is in clinical psychology, so she shouldn’t be overcommitting, but she saw it as something she had to do. If more people want to see more voices, then they need to get involved.”

She has achieved her Bachelor of Arts with a major in Educational Psychology and a minor in Māori Studies – a qualification that reflects both her academic and cultural pursuits at the University.

Telling her story and that of others has been an important part of that whāriki. While her time at Otago has come to an end, she still calls Ōtepoti home. Kaiya is interning with a technology company helping to create content with a mātauranga Māori focus for primary school children.

Despite her new life in Dunedin, Cherrington says it’s important to return to Whāngarei and celebrate with her parents and her wider whānau who made the journey possible.

“I just want my nana to make some fried bread and some mudcake from the cheesecake shop and celebrate with them all instead.”

While she may not be crossing the stage at the Dunedin Town Hall like thousands of other tauira this year, Kaiya knows her whāriki is complete. One that wouldn’t have been possible without the help of those closest to her and a stranger she met in a chance encounter.

“I’m really grateful she told me I had to do it, I would have been very lost without her.

“I might have to track her down while I’m in Whāngarei, I know a few people up there.”