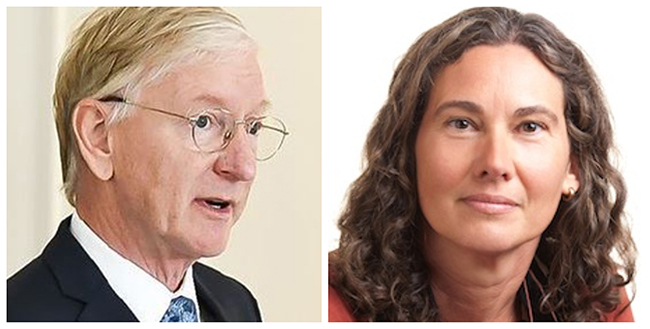 Next week’s visit to the University of Otago by German Ambassador His Excellency Stefan Krawielicki highlights how academic programmes provide a forum for learning about international relations.

On Tuesday, 18 May, Mr Krawielicki (above, left) will deliver a lunchtime seminar entitled Change of perspective: sharing experiences from 30 years of diplomatic life, which is open to the public (venue: Seminar Room G.02, Otago School of Business, Union St East).

Languages and Cultures Head of Programme Dr Antonie Alm (above, at right) says the Ambassador will also meet with students and senior staff, and tour the Dunedin campus.

The visit will provide students and staff with an opportunity to discuss a range of issues with Mr Mr Krawielicki and gain insights into features of the relationship between Aotearoa New Zealand and Germany, Dr Alm says.

“We are thrilled to be able to provide a platform to learn from a diplomat of Mr Krawielicki’s standing and a forum for discussion on a range of issues which Germany and New Zealand share common ground, including trade, economic reform and climate change.”

Mr Krawielicki specialised in law at Tübingen. After practising law in Paris, he joined the Foreign Office in Bonn as attaché and legal advisor. In 1990, he joined Lisbon’s German Embassy, and was appointed head of the Economic Section of the German Embassy in Riyadh. In 2000, he was appointed to Berlin’s Foreign Economic Affair department, later deputy head of the Cultural and Education Department, and head of Plenipotentiary for Franco-German Cultural Relations. In 2005, he became head of the Paris embassy’s Legal and Consular Section, later returning to Berlin’s Foreign Office as head of Culture and Communication, and German Schools Abroad, Youth and Sports.