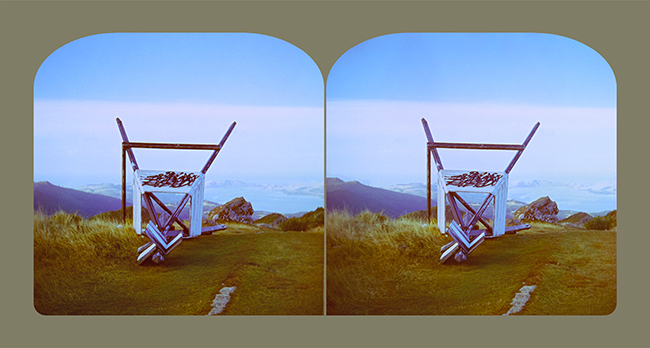 Pōkai Whenua, Pōkai Moana looks to Tamatea, a principal ancestor on the Takitimu waka. Being from Tauranga Moana, Reweti says Tamatea and the Takitimu waka provided the opportunity to make connections to mana whenua in Ōtepoti and Murihiku.

“As a guest in these lands it is essential to acknowledge mana whenua and also really exciting to find connections, through names and narratives, to my own iwi.”

The many names of Tamatea, two of which are included in the title of the exhibition, hint at his prowess at travelling over sea and land, Reweti says.

Following in her ancestor’s footsteps, Reweti has used multiple photographic techniques to make sense of both Māori and settler-colonial interactions with the land.

Through Reweti’s work, Māori perspectives are given precedence by making connections between landmarks, not through cartography or other ways of charting, but through the connection of whakapapa and kōrero whereby Tamatea and Takitimu are the means by which Tauranga Moana and Murihiku are linked.

Once re-imaged, Reweti added back into these images a crucial missing element - the whenua itself. The result is landscape photographs that have been hand-coloured with pigments derived from Papatūānuku.

This careful consideration of place is made more poignant by the fact that Reweti is the first Frances Hodgkins Fellow of Māori descent since Shane Cotton (Ngāpuhi, Ngāti Rangi, Ngāti Hine, Te Uri Taniwha) in 1998. The significance is not lost on Reweti.

“This has been a really rewarding fellowship to receive, and I hope it doesn't take another 21 years for a Māori artist to have this opportunity. I look forward to the University reviewing the structures around these fellowships to ensure a more representative reflection of Aotearoa New Zealand in their fellows.”

The wall text for Pōkai Whenua, Pōkai Moana has been supplied by four arts practitioners. Contributor Rauhina Scott-Fyfe (Kāi Tahu, Kāti Māmoe) says one of Reweti’s strengths as an artist is “humbly traversing the complexities of whenua and whakapapa by forging and strengthening relationships, giving space for other perspectives.”

“I think that comes across in the quality of her work: ehara i te toa takitahi, engari kē - he toa takitini.”