Challenges and rewards interwoven for Peace and Conflict PhD grad 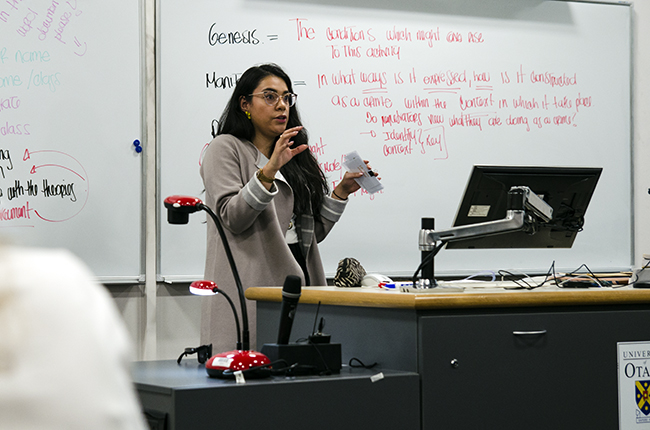 Peace and conflict studies can take researchers to interesting and challenging places, but the reward is more than worth it, says August PhD graduate Alejandra Ortiz Ayala.

Alejandra also worked as a consultant for the Colombian Army in 2014 during peace negotiations between the government and the Revolutionary Armed Forces of Colombia – People's Army, which ended five decades of civil war.

For her thesis, Alejandra conducted surveys (with embedded experiments) with 920 Colombian low and middle ranked soldiers and interviewed 28. This showed the extent to which the soldiers would support the former rebel’s political and social reintegration following the peace agreement, and their willingness to protect civilians that share the political identity of former rebels.

“Interaction with the members of the Colombian army, including those who are also recognised as victims of the conflict according with the international law, was particularly important because peace and conflict literature often focuses on the rebels’ reintegration and disarmament.

“However, I became aware of the nuance of civil war conflicts as challenging the dichotomous identities of ‘victims’ and ‘perpetrators.’ This enhanced my understanding of the armed conflict's causes, the complex factors that underlie violence, and why some violent conflicts persist even after peace agreements are signed.

“In theory, it is expected that state security forces will protect those who are part of the reintegration process. But if members within the state security sector continue seeing former rebels as enemies or a potential threat, new cycles of violence could arise.”

A challenge arose when the incoming Colombian government opposed data collection. Fortunately, Alejandra’s army contacts supported the peace agreement and were open to considering “critical approaches toward the army and initiatives to understand its members’ perceptions and beliefs after the peace agreement was signed.”

Alejandra says advice from her external adviser and local academics was crucial in developing good quantitative and qualitative methodologies in a political atmosphere that didn’t favour her data collection.

This unprecedented access underpinned research that is unique in the Colombian context and the field of peace and conflict for political scientists studying civil wars, Alejandra says.

The journey to Otago 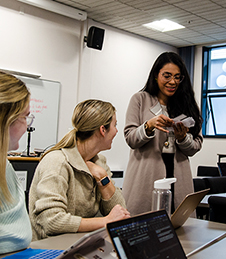 more than ten years ago. Along with good academic grades, she needed to learn English, which is no mean feat in Colombia, which ranks 17th out of 19 Latin American nations for English literacy.

“If you know English at an early age in my country, it’s likely you come from a wealthy family. That was not my case. I learned English as an adult, which is more difficult. I paid for courses with private teachers and even went to Russia to study English. After my bachelor’s and master’s graduation, I invested all my salary preparing for achieving the English requirement needed to do a PhD overseas.”

Alejandra chose overseas PhD study to connect with academics from around the world and be part of academic circles within peace and conflict studies that produce theories, conduct research and create policy advice to understand contexts like Colombia.

“Colombians or people from regions that experience prolonged conflict like civil wars are not just victims of conflict or research objects. We also produce theories and ideas that are often ignored. We may need to push a bit to be invited to those circles of knowledge production. In theory, I now have the credentials to be considered a legitimate scholar in those contexts. Let’s see if they give me a chance.”

Alejandra is proud of her achievements, which have followed an ‘outsider’ theme; in Colombia, she was a student at the best private university without belonging to the socioeconomic profile of her cohort.

“At Otago, I have been challenging the system's constraints as a female, person of colour, and international scholar from the global south within a global north university. So, the most special thing about graduating will be that, despite those constraints, it was possible. I owe many people for their support and this is a collective achievement. I would like to express my gratitude to those who mentored me, supported me, and who believed that I would make it! We did it!”

The impact of COVID-19

During her studies, Alejandra was accepted as a visiting scholar at a German university, on a summer course in France, and for a poster presentation at a prestigious conference in Hawaii. She had paid for tickets and accommodation when COVID-19 restrictions saw all travel cancelled.

The lost opportunities caused by the pandemic have been partially offset by participation in virtual conferences and support and mentorship from scholars worldwide.

COVID-19 also changed the way Alejandra celebrated graduation with family; the graduation was to be held on her mother’s birthday, 21 August ceremony, so virtual celebrations were planned.

“My partner planned a livestream of my day to her and other members of our family. My mother has been an unconditional and main support. Being a single mother is not easy; she managed to give me everything I needed. She also allowed me to dream as big as I wanted. I will miss her tons during my graduation, but she is with me every single step. She has made a lot of sacrifices in her own life to help me with my dreams. So, my graduation is a perfect gift for her. ¡Feliz cumpleaños mami, te amo!”

Alejandra would like a postdoctoral position in a project that allows her to grow as an academic, learn from others, and “be surrounded by people who share the same values and can mentor me to achieve my next step – a tenure track academic position in a university.”

“I’m open to any path that drives me towards becoming an academic that influences theories and policy decisions in a context like Colombia and challenges the power dynamic of knowledge production. This could happen back home or in another place around the world. I have learned that being flexible with the path is important. If you have an idea of the destiny, I’m personally happy to leave the path to God.”

Alejandra’s thesis was supervised by National Centre for Peace and Conflict Director Richard Jackson and Robin Turner; Jonathan Hall from Uppsala University was her external advisor.

1. One of my first in-depth interviews was with a soldier, a victim of an improvised explosive device (IED). We were both around the same age (23 to 24). He was the leader of his military unit that was patrolling areas under rebel governance. While they were walking, he activated the mine, and minutes later, he figures out they were surrounded by the rebels. After he activated the mine, he continued directing his subordinates while lying on the ground, covered in dirt. He felt that the shots came from the trees and he screamed to the other soldiers, “they are in the trees”. He went blind after the accident. The day of his accident is my birthday.

2. I was interacting with some former frontline rebels and realised some of them came from the same socioeconomic background as the soldiers from the front line I interviewed. Children of peasants from areas where only the army or the rebels are present. Precarious schools, no hospitals, no access roads. Economic needs and lack of opportunities are similar in each group. Just like their dreams, some rebels and frontline soldiers originally dreamed of being doctors or teachers. "Serving the community" was a common goal among the frontline soldiers and rebels with whom I had the opportunity to interact. For different reasons, they ended up on opposing sides of the war, but they shared the same justification, they believed that they were serving the people.

3. I was in a focus group among soldiers, and one shared a story. During a confrontation between the Colombian Army and one of the rebel groups, a soldier saw a rebel running and shooting. He was behind, running and shooting as well, chasing the rebel to capture them. At some point, they were in front of each other and he realised that it was a woman, and she was pregnant. She could shoot him, but she did not. He could also shoot, but he did not. Years later, he saw her with a baby taking the bus in the capital city of Colombia. Their eyes met, they smiled.

I am always interested in why people are curious about scary or unusual moments in my work. I have witnessed the complexities of humanity and the humanity in all of us – even those that I feel deep ambivalence towards.

But, I believe that if you want to study something like Peace and Conflict Studies, you need to expose yourself to the reality of the contexts you are talking about, to see and experience the nuance of a conflict, and also keep doing self-reflections. You cannot find certain things in the textbooks, especially if those textbooks are written by people who have never been in the field for more than a few months. So, the only scary thing that I face while I’m interviewing soldiers or ex-rebels is the ignorance from some of the dominant narratives in the field of Peace and Conflict Studies. 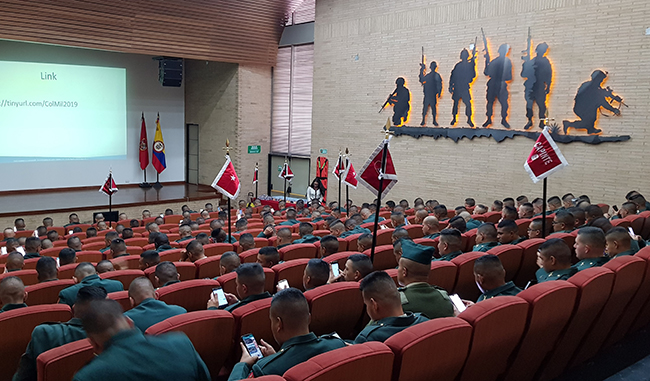