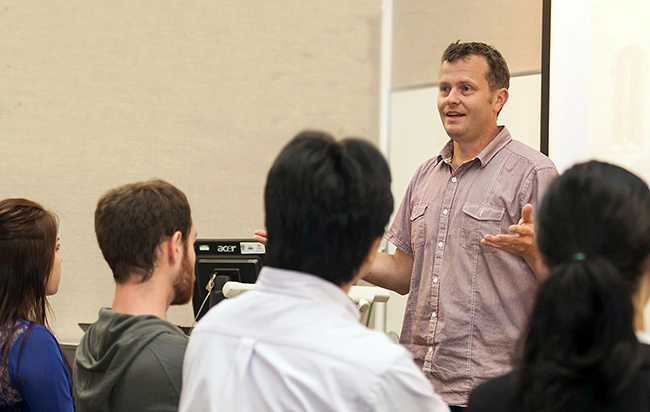 School of Arts Head Professor Tim Cooper’s desire to see students “fall in love with history” has led to a prestigious Ako Aotearoa Award for Sustained Excellence in Tertiary Teaching.

Over 16 years of teaching at Otago, Professor Cooper’s approach has evolved to meet the needs of the “splendidly diverse” range of students taking his History of Christianity papers.

Coming from around Aotearoa, his students range from Year 13 secondary school pupils taking 100-level papers to mature students balancing study with the demands of employment, ministry, or voluntary service in their communities.

“Knowledge levels vary. Some are wrestling with faith issues, while others come with a deep hunger for more knowledge about Christianity. A priority is to cultivate an optimal environment where they feel safe, confident, engaged and in control, so they can see their world from another point of view.”

A key step in this process was rewriting an inherited curriculum that confined students to “old frameworks of learning” so they could “tighten their thinking and wrestle with problems, and recognise difference, dissonance, subtlety and complexity”.

While standard Church History curricula usually focus on the western story, his 100-level course content brings in the non-western story, which challenges students with some “disturbing implications”.

“The Christian faith, they discover, is normally lived out in contexts of suffering and persecution, not comfort and shelter.”

His 400-level Theology, Ministry and Chaplaincy students, who have generally done little or no history, are thrown into the depths of his own research area; seventeenth-century English religious history.

“This can be daunting, but I teach in the tension between genuine faith and intellectual interest, so I want to help build understandings of other perspectives. I also genuinely believe in academic inquiry furthering critical interpretation. It was incredibly gratifying to have feedback from a student that said the course had ‘blown away a whole range of preconceptions and helped [them] see history through a totally different lens’.”

Much of Professor Cooper’s approach to learning stems from a challenging childhood, in which parental and pedagogical role models were few; his first History teacher’s approach was solely to write notes on the blackboard to be copied down. Despite this, history gave meaning and perspective to his situation.

“I saw adversity was part of the human story across time. Because of this, I am always seeking for my students the kind of opportunity I was given: to fall in love with history. A transformative understanding of the past will equip them to reassess their own faith position, of any faith or none, with new eyes.”

Later this month Professor Cooper and the other Tertiary Teaching Excellence Awardees will give a short presentation online before Ako Aotearoa announces which recipient will receive the Prime Minister’s Supreme Award.

In 2017, Professor Cooper took on an 0.6 FTE leadership role in the Division of Humanities as Associate Dean (Academic). A priority was building the Division’s Academic Committee as a team that implemented strategic initiatives that would benefit staff; it subsequently introduced the teaching excellence awards and the ongoing annual Teaching and Learning Symposium.

To further promote peer review, Professor Cooper introduced Teaching and Learning Circles. In his current role as Head of the School of Arts he is working on several fronts to enhance the learning environment School-wide. 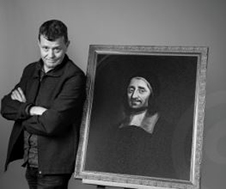 Professor Cooper with a portrait of Richard Baxter, the subject of his IPL on 23 November.

In 2011, Professor Cooper designed and piloted a new blended-learning model for the Theology Programme that introduced online discussion and a day of face-to-face teaching in Auckland, Wellington and Dunedin early in the semester. In 2012 the Distance Education Association of New Zealand presented him with a Merit Award in recognition of his leadership and design, and examples of this innovative model were included in Australian academic Rod Sims’ 2014 book Design Alchemy. He received a University of Otago Teaching Excellence Award in 2014.

Professor Cooper’s research and publications include work on Elizabethan separatists and Congregationalists – and prominent figures of this era such as Richard Baxter and John Owen – religious identity, seventeenth-century English Antinomians and the conception of ‘radical’ religion during the English Civil War. He will present his Inaugural Professorial Lecture, entitled Why Richard Baxter Matters (to me), on 23 November. Full IPL details and live-stream link here.