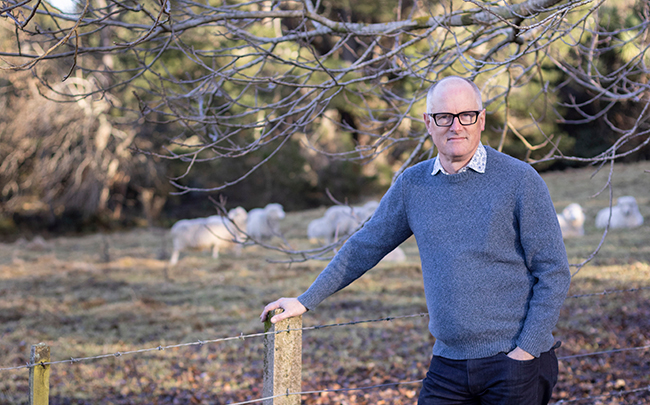 Farms only produce food, right? In Farming Inside Invisible Worlds: Modernist Agriculture and its Consequences, Sociology, Gender Studies and Criminology Professor of Hugh Campbell shows farms have in fact been a key player in the creation and stabilisation of political, economic and ecological power in colonised landscapes like New Zealand, America and Australia.

Published by Bloomsbury Academic last year, the book evaluates, and rejects, the way farms have been characterised in orthodox economics and agricultural science from the colonial era on, to discuss the “often hidden political, racial and ecological effects” of farming.

Professor Campbell describes the accessible book, and his reasons for writing it: 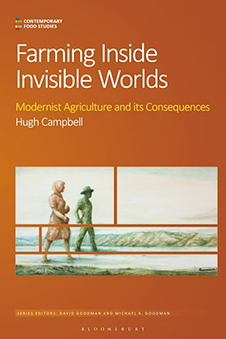 We are currently experiencing a major ‘moment’ in scholarship in Aotearoa New Zealand where all sorts of questions are being raised about how to bring an understanding of colonisation and its impacts into previously settled and uncontroversial areas of research, media and daily life. However, virtually no academic scholarship has been asking this kind of question about potentially the most significant colonising venture in our entire modern history: pastoral farming.

The prior formal written history of farming in Aotearoa New Zealand has been constructed in patchy ways, with some key areas of high focus and a lot of very big gaps. There is a lot said about agricultural science, about the breeding of key species like sheep and grass, about farmers as a political class, and about the centrality of the huge pastoral farming economy to the economic welfare of Aotearoa New Zealand through the middle of the 20th century.

These kinds of foci leave a lot unsaid: particularly in relation to questions of colonisation. There is, for example, an almost total erasure of Maori farming out of the written history of the 20th century in Aotearoa New Zealand.

The first body of work to break out of this mould was by environmental historians like [Otago History Professor Emeritus] Tom Brooking who have looked at the environmental impacts of British style farm in the unique ecosystems and environment of Aotearoa New Zealand.

This book – Farming Inside Invisible Worlds: Modernist Agriculture and its Consequences – builds on that environmental history work to create a fuller and even more challenging consideration of the role of pastoral farming in the colonisation of Aotearoa New Zealand. To do this, the author discusses a sequence of farms from his own farming forbears who arrived in Aotearoa New Zealand between 1840 and 1882. These farms tell a story about farming immigrants who were seeking to leave behind desperate situations back in Britain, but in setting up their new farms unleashed multiple vectors of change that devastated environments and effectively marginalised Maori and progressively eliminated the forest and wetland spaces that had been major resource sites in order to convert them to grass pastures.

Academic reviewers of this book point towards a particular way in which the author uses a novel theorisation of the ‘agency of farms/farm ontologies’ to change the way we think about the history of farms and, in particular, the farms in our own family histories. During colonisation, farms become agents of environmental and racial annihilation/replacement and then bedded in new histories and new landscapes that rendered those other worlds invisible.

Reviewers and readers from outside academic contexts are enjoying this book simply because it tells an accessible story about farming and colonisation, does so in a sequence of intriguing personal family stories (including illustrations taken from old family farm photos), and demonstrates how our very specific approach to farming had far-reaching environmental, political and cultural consequences.

Read more about Farming Inside Invisible Worlds from Bloomsbury here.