Celebrating a life of music, service and family 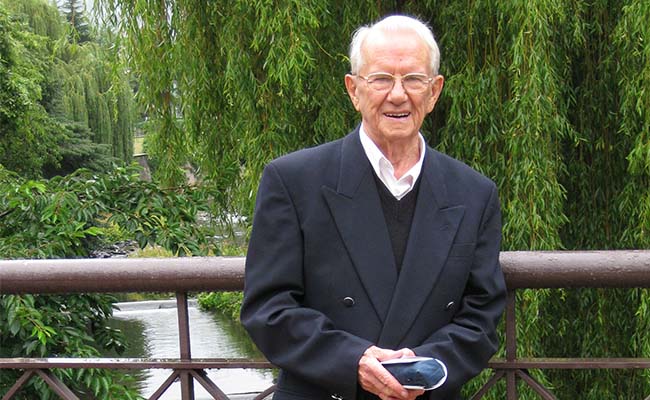 A life of music, service, hard work and family will be honoured at a special concert being held at Marama Hall on 1 December to celebrate the 100th anniversary of the birth of renowned New Zealand composer and Otago alumnus Emeritus Professor John Ritchie.

Organised by Otago’s Head of the School of Performing Arts – and John’s son – Professor Anthony Ritchie, the concert will feature five composers who have written musical tributes for piano: Ken Young, Philip Norman, William Green, Julie Johnson and Anthony Ritchie. John’s own music will be represented with piano pieces and songs, and the concert will feature University of Otago performance staff Professor Terence Dennis, Tom McGrath and Dr Tessa Romano. Spoken tributes will also be given between items.

Professor Ritchie says the initial spark for the concert came from composer William Green, a music teacher in Auckland, who sent him three pieces he’d written based on a theme of John’s, to mark his 100th anniversary. John died on 29 September 2014.

“It just got me thinking, why don’t we put on a concert to commemorate Dad’s music? And I asked three other composers who I knew had known Dad quite well to write little pieces, including our Mozart Fellow Ken Young who had a lot of dealings with Dad. Philip Norman has also composed something, and Julie Johnson, who wrote a PhD on Dad’s music, and I’ll contribute something too.

“I was in the army band, playing the tuba and getting fed up with route marches in Hororata, when the conductor became unwell. I volunteered to leave the tuba, which was a hell of a weight to carry around and got my first conducting assignment.”

“So it’s just like little dedications to Dad, in piano music mainly. We’ll have some of Dad’s own piano music played, plus three special songs of his as well which Tessa Romano is going to sing. So [it will be] quite a humble offering but just a nice dedication.”

In a Radio New Zealand interview with Philip Norman in 2011, marking his 90th birthday, John said he first considered becoming a musician while he was a student at King Edward Technical College in Dunedin, and music master Vernon Griffiths put him into the choir. He then asked to play the piano, but all the piano teaching was done on cardboard cut-outs of a keyboard, and he wasn’t impressed, and asked to move onto a different instrument.

In the space of four years, he went on to become “a handy player” of the clarinet, cello, double bass, trombone and tuba.

It was also while he was at technical college that he met his future wife, Anita Proctor, at a music camp at Pūrakaunui. His first composition was a song set to words written by the 15-year-old Anita, “who I admired very much and eventually married, and with whom I had a wonderful family of five kids”. 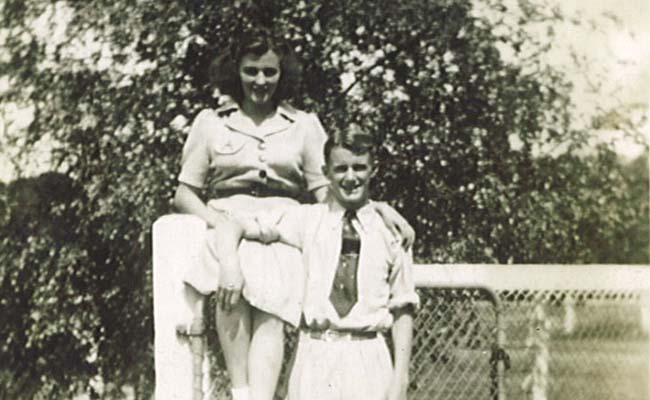 John and Anita Ritchie in Dunedin circa 1940.

Anita, who died in 2001, was a nationally recognised soprano. As well as Anthony, who has followed a career in music, his other children Judy, Jenny, Liz, and Simon have all played and sung music, and are passionate music followers.

After high school, John studied music at Otago, graduating MusB in 1944, and trained as a teacher at Dunedin Teachers’ College. Due to the war, he completed his degree in two years. Professor Ritchie says his Dad spoke warmly about his time at Otago. As a keen sportsman, he was very proud of being awarded a hockey blue while at University.

“He talked about how back in those days it was J C Bradshaw who was the music professor and it was a rather academic approach to music. You didn’t compose music and you didn’t perform. You wrote the history and you did your exercises in the style of Bach or whoever. He told me that they more or less spent the whole year studying Beethoven’s Fifth Symphony.”

After his degree he enlisted in the army, going on to also serve in the navy and airforce, flying Spitfires off aircraft carriers.

“He was one of the lucky ones who spent considerable time abroad but saw little action,” says Professor Ritchie.

In 1946 John was appointed a lecturer in the School of Music at the University of Canterbury, where he remained for his academic career, becoming Head of the School in 1962. During 1956-57 he undertook postgraduate study at Harvard University under composer Walter Piston, and from 1967-68 he held a Visiting Professorship at Exeter University and served on the board of Trinity College of Music, London.

In the RNZ interview, he says his time at Harvard was “the best thing I ever did”.

“He [Walter Piston] loosened me up and told me you’ve just got to be yourself. He divined a certain Englishness in my composing – I’m not sure if it was there or not, but it probably was. He was a very experienced teacher and a humble man.”

“He taught at a uni for 40 years and he helped to develop the School of Music at Canterbury University from a small department that was purely academic to a department which had performance, composition, and a wide range of types of music. He brought it into the modern age to some extent,” says Professor Ritchie.

As a composer, he was known for choral music, music for brass, concerto-type works, carols and church music. Of his 275 registered compositions, many were written for the community, including for schools, bands, choirs and church. He also wrote the music for several important events in Christchurch, including the Commonwealth Games in 1974, the papal visit in 1986 and music for the funeral of Prime Minister Norman Kirk in 1974.

“Probably the community side of what he did was more important back in those days. There was less professional music happening and there just weren’t the organisations to support it,” says Professor Ritchie.

He started the John Ritchie String Orchestra in the 1950s, which formed the basis of the current Christchurch Symphony Orchestra.

Professor Ritchie says to a large extent his father “threw away the English guidebook on how to compose, which he inherited from Vernon Griffiths, and looked to try and do things his own way, to develop his own style”.

He also liked to write music that was specific to particular places, such as his Papanui Road Overture.

Professor Ritchie thinks as a composer John would have considered having his Concertino for Clarinet and Strings recorded onto a Kiwi Pacific long play record and published by Novello in London as one of the highlights of his career. He also had a CD recorded by the New Zealand Symphony Orchestra, which included his Papanui Road Overture amongst other works, and which was “a nice summary of some of his best work”.

On top of his academic music career, composing and a busy family life, John Ritchie also served as Acting and Deputy Vice-Chancellor of Canterbury from 1973-1983. He was made an Emeritus Professor at Canterbury on his retirement in 1985.

The youngest in the family, Professor Ritchie says his father influenced him on two levels.

“One is just the sheer fact of being a composer meant that I didn’t think it was strange to write music. It seemed like a normal activity, so I happily composed when I was a teenager.

“As to his actual musical influence, I was not that conscious in the early days of following him because I had my own likes which were quite different to his. But looking back I can see possibly some subconscious influences of his music, and I think one of those is a tendency to want to be practical for the musicians. I would say that a lot of my music, like his, is written with the performers in mind and trying to make it work for them. It’s quite performer-focussed rather than just writing anything I like and saying ‘here, play it’ no matter how hard it is. Some composers expect performers to do what they say. I guess you could say we both met the performer half-way.”

You can watch the Dunedin Symphony Orchestra perform John’s Concertino for Clarinet and Strings here.

The John Ritchie anniversary concert at Marama Hall starts at 5.30pm on 1 December, and tickets ($10 waged, $5 unwaged) will be available from 1 November, via the Humanitix site.

There will be door sales as well. Numbers may need to be limited to 60 if we remain in COVID-19 Alert Level 2.