The University of Otago’s Neil Vallelly has been awarded a prestigious Rutherford Foundation Postdoctoral Fellowship.

The Fellowships – announced today by the Royal Society of New Zealand – provide funding to outstanding PhD graduates to undertake two years’ postdoctoral research in Aotearoa. Fellows receive an annual stipend of $75,000 and $10,000 to put toward research costs. 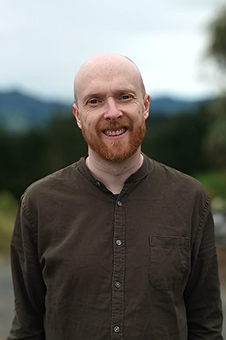 Dr Vallelly, (Division of Humanities), will use the Fellowship to examine the relationship between contemporary capitalism - often referred to as neoliberalism - and the rise of migrant detention, especially of asylum seekers, during the past four decades.

“It examines a paradox at the heart of our age, where capitalism depends on a borderless world of free movement, globalised markets, and free trade, and yet at the same time, borders have become the sites of unimaginable suffering, where millions of refugees and asylum seekers are trapped and detained,” Dr Vallelly says.

“Aotearoa New Zealand is not immune to this problem, and human rights non-governmental organisations and journalists have criticised the detention of asylum seekers in New Zealand, who are often placed in prisons alongside criminal offenders and held in detention for long periods of time.

“What I aim to show in the project is is that the detention of migrants at borders is deeply implicated in the history of neoliberalism and its implementation into policy in the late twentieth century. And thus, if we are to adequately attend to the needs and rights of refugees and asylum seekers, we must also counter the social and economic inequalities associated with neoliberalism.”

Dr Vallelly says there is an “urgent need” to examine this issue.

“The latest UN figures indicate that there are at least 82 million people displaced around the world at the moment – that’s one in every 95 people on earth – and that number is increasing rapidly, year on year.

“The border is the site where so many global issues converge—from global inequality between the Global North and Global South, the legacies of settler colonialism and Western imperialism, climate change and climate refugees, and most obviously right now, the COVID-19 pandemic—and these issues are often translated into human suffering for refugees and asylum seekers, who are, in many ways, the primary victims of the global power structures that create border regimes.”

The border is not a problem that is going to disappear, especially in the aftermath of the pandemic, he says.

“Border regimes tell us so much more than just who can or cannot enter a country – they essentially tell us the story of the world and my aim in this project is to both tell the history of that story and to shape the narrative in a way that attends more ethically to the needs of refugees and asylum seekers in the future.

“Furthermore, the detention of asylum seekers in New Zealand is particularly important in the context of Te Tiriti o Waitangi, as such detention contravenes some of the central concepts that emerge out of Te Tiriti, especially manaakitanga—hospitality and compassion towards others—and tino rangatiratanga—the Māori right to self-determination. Precisely because of the Te Tiriti, New Zealand has the capacity to be a leader on the world stage when it comes to refugee and asylum seeker rights, but this is a role that it is really not fulfilling at the moment.”

Originally from Ireland, Dr Vallelly arrived at Otago on a Commonwealth PhD Scholarship in 2012, completing it in English Literature in 2015.

This Fellowship will mean more than just job security, he says.

“It will also give me the time and space to do the foundational research for this project, which will eventually develop into a book on the topic. It will also allow me to organise public events on some of the key issues that emerge from the project, and to build relationships with local iwi, humanitarian organisations, and activist groups working directly on refugee resettlement and issues related to prisons and detention.”

Dr Vallelly is one of five fellowship recipients nationwide this year.