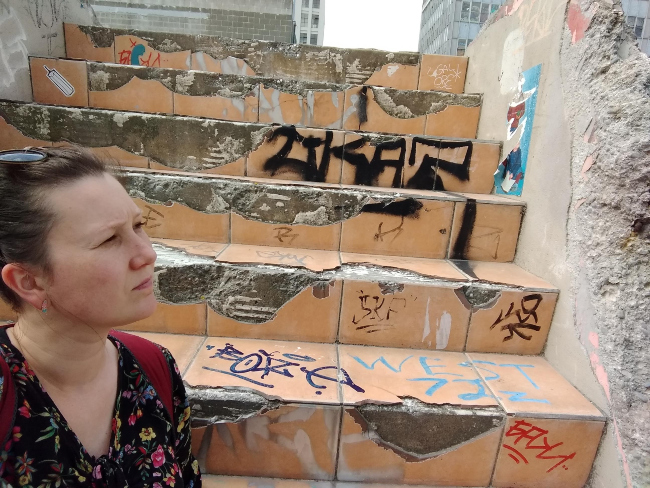 Last week Dr Wardell received the award for Red Zone Pie. The essay drew on her earlier research, including a 2019 project exploring collective grief and 'online care' after the Christchurch mosque shootings and a 2020 UORG grant-funded project entitled “Remembering together: an ethnographic study of the one-year anniversary of the Christchurch mosque attack”. The second study focussed on both material and digital practices of memorialization following the event.

Her 2012 to 2015 doctoral research on burnout, empathy, and care among Christchurch’s faith-based youth workers in the years after the earthquakes also informed the essay.

Familiarity with Christchurch and wider experiences of the region meant she could readily connect these themes to the competition’s topic – “radical connections”, Dr Wardell says.

“The writing prompts for this competition challenged me to think deeply, and differently, about what I had been learning through my Christchurch fieldwork. I was grateful for the opportunity to explore a very specific aspect of my research that had gone in a different direction to my original plans, but which still felt like a significant angle of insight . . . leaning into the awareness that landscapes and ecological systems are not the ‘neutral background’ to our social histories, but dynamic agents in them.”

“It felt so exciting and affirming to receive a prize for a piece that wove together my creative practice and academic research in a new and meaningful way – I’m very honoured to have been recognised.”

“It takes us on a foraging journey through Christchurch’s red zone and beyond, foraying into a cross-cultural and repurposed future that reconnects us with a past that refuses to be erased,” he says.

Headland, in partnership with Zealandia urban ecosanctuary and Massey University School of Humanities, Media, and Creative Communication announced the major new prize for creative nonfiction would be awarded for the first time in October.

Radical Connections topic was chosen to align with "Zealandia’s vision of connecting people with nature and restoring and protecting Aotearoa New Zealand’s native taonga" and submissions were invited to address issues around conservation, biodiversity, and kaitiakitanga; community, hauora, and living with nature; ecology, art, and imagination; or mātauranga, scientific knowledge, and personal experience.

David Vass’ ‘How blue is your river?’ was second place winner, with Conroy describing the work as “a poetic but clear-eyed rumination on the tragic ecological degradation of the Clutha River from someone whose connection to the place is as sustained as it is radical.”

The three winning entries will be published in full in Issue 16 of Headland and will be available to read on the Headland website.