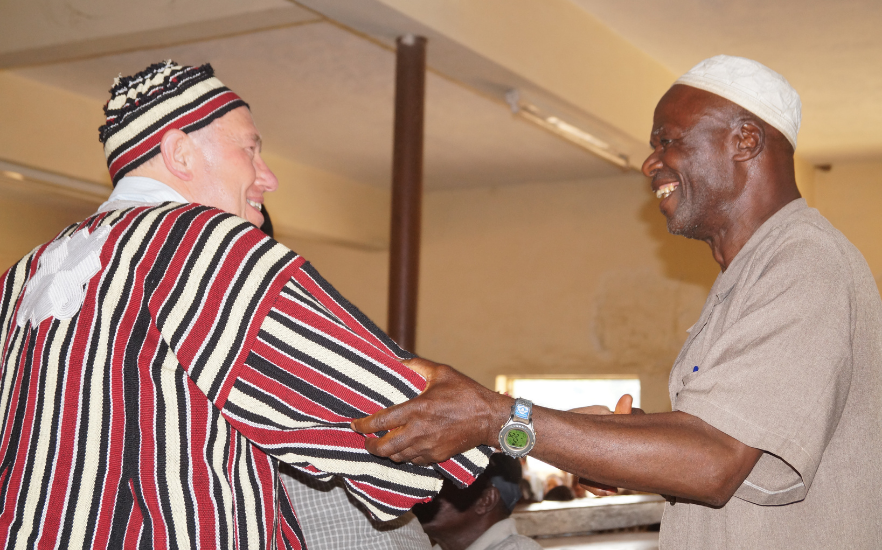 Professor Tony Binns (left) at the Court Barri (Meeting House) in Sierra Leone when he was named a new Chief in 2014.

It’s fitting that one of Geography Professor Tony Binns’ last acts before retirement was boxing up the hundreds of books in his office for donation to the University of Sierra Leone, in Freetown.

In retirement, the Ron Lister Chair in Geography will maintain links with the African communities and institutions he has worked with for almost 50 years.

These include three projects in Kayima, Sierra Leone – where he was made a chief in 2004 – setting up a vegetable garden at the secondary school, putting the finishing touches to a Nursery School for 200 young children, and refurbishing the community Health Clinic.

“Thus far, we have raised about $43,000 for these projects, through a variety of fundraising events undertaken by my students and by St Margaret’s College, and also donations from Graduate Women Otago (Nursery School) and several Rotary Clubs in Dunedin and elsewhere in Otago (Kayima Clinic).”

Throughout his career, Tony has expanded on themes from his doctoral research from 1974 that investigated relationships between rural development and diamond mining in Sierra Leone. While he has travelled and researched extensively throughout Africa his work has taken on pan-global dimensions.

He came to Otago in 2004, and continued research on resource development and poverty alleviation, with particular reference to the dynamics of indigenous farming, pastoral and fishing food production systems. Recently he has focused on community-based development initiatives in South Africa, post-war community reconstruction in Sierra Leone and Sri Lanka, and urban agriculture in sub-Saharan Africa and Vietnam.

His varied work earned him many awards, including the Distinguished New Zealand Geographer Medal 2012 and he was made Chief Manjawah of Sandor (master farmer), and Sahr Kayima (first son of Kayima) in Sierra Leone in 2014.

What got you interested in African studies and your area of work?

I studied for my BA Hons degree at Sheffield University, UK, and in my final year I took a course on Africa with a young tutor who had just returned from doing research in Nigeria. Her name was Jennifer Bray. It was a wonderful course that really 'fired me up'. After taking a Teaching Diploma (with distinction), I then went into school-teaching in Doncaster, Yorkshire and the Principal asked me to teach a General Studies course to the Sixth Form, so I chose to teach 'African Studies'. It proved to be such a success that I was asked to repeat the course. I greatly enjoyed teaching, but I wanted to know more about Africa and hopefully go there. At that stage I hadn't been outside the UK so I went back to Sheffield and spoke with Jennifer Bray. She suggested I should perhaps study for a master’s degree at the Centre of West African Studies at Birmingham University. I spent a year studying at Birmingham University and enjoyed the master’s courses immensely. Still not having been to Africa, I decided to stay on at Birmingham to do a PhD and chose to work in Sierra Leone where my supervisor had spent some time lecturing in the 1950s. My research topic was focused on understanding the relationships between diamond mining and rural development in Sierra Leone, a topic which is still highly relevant today (50 years later!). On 21 January 1974 I set off to fly from London Gatwick Airport to Freetown, the capital of Sierra Leone. I was there until December 1974 and it was undoubtably one of the best years of my life and further strengthened my desire to research and teach about Africa! 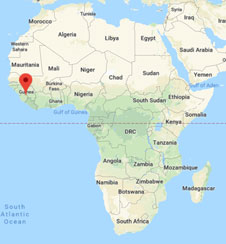 Kayima is located in the far north-east of Sierra Leone.

What are some achievements you’re most proud of?

I was based at the University of Sussex, UK (1975-2004) and then the University of Otago (2004-2021). I have always enjoyed working with young people. I have taught thousands of undergraduates, hundreds of master’s students and will have had 35 PhD completions when my last ones submit their theses. Several of my PhD students are now professors in universities across the world, or are involved in high-ranking positions such as advising the European Union on development policies, managing development strategies in the Mekong River Basin, and advising on sustainable forestry policies in Ethiopia.

In 2006, I played a key role in setting up the UNIVOL programme with Volunteer Service Abroad. The UNIVOL programme started with Otago Geography, but is now available in all NZ universities. This has enabled over 120 third year students from NZ universities to take part in a wide range of community-based development projects in Pacific countries. In 2019 VSA awarded me Honorary Life Membership for my work.

Another significant achievement whilst at Otago has been to work with my Geography colleagues to set up a master’s programme in Development Studies. We now have the Master of International Development and Planning (MIDP). In the QS rankings of March 2021, we were pleased to see that Otago was ranked first for Development Studies among New Zealand universities.

What’s some research that defines your approach to the field, and your priorities as an academic?

There are two areas of research and teaching that have dominated my 47-year university career.
First, I have a keen interest in Geographical Education and the contributions that Geography can make to the school curriculum. With growing issues of concern such as the impact of climate change, environmental sustainability and sustainable livelihoods, particularly in poor countries, I believe Geography has a key role to plan in understanding patterns and processes associated with people-environment relationships. In the UK, as Secretary (1985-1989) and then President (1994-95) of the Geographical Association, I played a leading role in advising on the setting up of the National Curriculum in Geography. I was also involved in training Secondary Teachers of Geography at Sussex University from 1981 to 1994.

Secondly, my research has focused on issues associated with community-based development in poor countries, mainly in Africa, but also in countries such as Vietnam, China and Sri Lanka. I have focused particularly on community upliftment, poverty alleviation strategies and strengthening food security. I believe that many past development interventions have failed because they have not been introduced with the consent and commitment of communities and have often ignored the valuable local knowledge that exists. For successful development interventions it is vital that ‘top-down’ strategies should be replaced by more community sensitive ‘bottom up’ strategies.

I have published widely in journal articles and book chapters on both geographical education and community-based development.

Many of your projects have involved farming and poverty alleviation – what personal beliefs or experiences made you want to work in this area? Do academics in wealthier countries have a responsibility to do work like this which has tangible outcomes in poorly resourced areas?

I firmly believe that we should all develop empathy for individuals and communities that are less fortunate than ourselves. Here in Dunedin most children born today can expect to live well into their 80’s, whilst in many African countries life expectancy is still in the 50’s: 30 years less than in richer countries such as NZ. Reducing poverty and improving the quality of life should be a concern for all of us. I believe that academic research should have some benefit and tangible outcome for others. With my students and with VSA volunteers I always ask the question: what benefit has your work had for the people with whom you were working?

What does it mean for academia in NZ that you are one of the last people working in this area?

The University of Otago has the strongest group of academics and postgraduates working on Africa in New Zealand. Africa comprises some 54 countries and is the poorest continent on earth. According to the United Nations Development Programme (UNDP) the 10 poorest countries in the world are in Africa. My undergraduate Geography course (Transformations in Developing Countries) is, I am told, the only course on Africa taught in NZ universities in any subject discipline. A recent research project undertaken by the African Studies Association of Australasia and the Pacific (AFSAAP) found this to be the case. My course has had between 120 and 170 students taking it in the past. So, there is apparently no shortage of interest among young people. When I retire it is likely that this course will no longer be offered to students. After I retire, I would like to see teaching and research on Africa being strengthened at Otago.

Any ongoing work you’d like to do with in retirement?
I am currently finishing writing the Second Edition of my book Africa: Diversity and Development – co-authored with Etienne Nel and Alan Dixon, and published by Routledge, UK. I will certainly maintain my links with communities that I have worked with in Africa. In Kayima, Sierra Leone there are currently three projects- setting up a vegetable garden at the secondary school, putting the finishing touches to a Nursery School for 200 young children, and refurbishing the community Health Clinic. Thus far, we have raised about $43,000 for these projects, through a variety of fundraising events undertaken by my students and by St Margaret’s College, and also donations from Graduate Women Otago (Nursery School) and several Rotary Clubs in Dunedin and elsewhere in Otago (Kayima Clinic). My good friend and Kakanui horticulturalist, Jim O’Gorman, has given generously to fund the ‘Bill McConachie Vegetable Garden’ in memory of his good friend, also a well-known local horticulturalist.