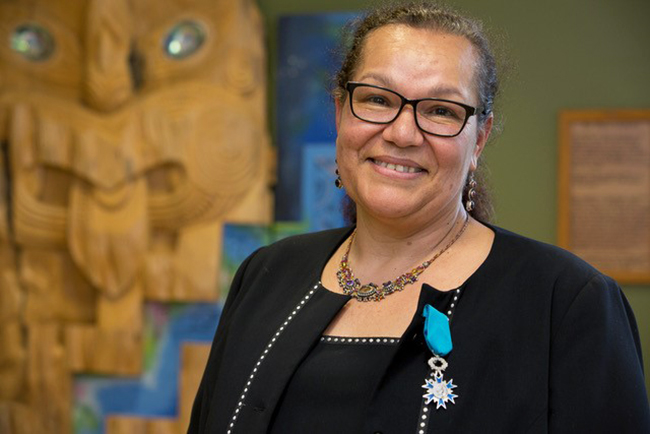 Dr Leurquin receiving the French Order of Merit in 2017

The French Ministry of Foreign Affairs has awarded Social Anthropology lecturer Dr Christiane Leurquin EU$100,000 to create a documentary and educational material on how intangible cultural heritage and traditions are passed from mothers to daughters in New Caledonia.

Christiane leaves this week to conduct a study in New Caledonia, asking middle-aged Kanak mothers about what they learned from their own mother and grandmother, and what they teach their daughters regarding traditions and morals.

She will be talking to women who grew up before television (and in some cases radio) entered homes and traditions were challenged by globalisation.

Christiane says the idea for the project came from her research on the part women played in traditions, as well as talking to older women in her family. She realised that there are very few women telling their story, and that when this generation is gone, a lot of their knowledge will be lost.

Interviews will be conducted in a language chosen by the women and recorded and filmed. In addition to the official language – French – there are 28 languages in New Caledonia.

“Recording these mainly oral languages will also help preserve an important aspect of the cultures.”

Christiane says the research project is important because New Zealanders view the Pacific as being mostly Polynesian, and there are very few publications in English about Melanesian or Kanak culture.

"A review of the school curriculum since 2020 in New Zealand highlighted the need to include Pacific Studies. Similarly, universities are showing the same interest for their neighbours. Kanak culture is included in the New Caledonian primary school curriculum, though information for teachers is lacking.

"This really needs to be addressed because, as we are seeing, New Zealand wants to be a key player in the region – but this can’t happen if we don’t understand and respect the many rich cultural traditions that are a features of many disparate populations across this vast geographical region.”

Christiane says the project will be completed in 2023 will be used by primary schools in New Caledonia. It will be available in English in New Zealand.