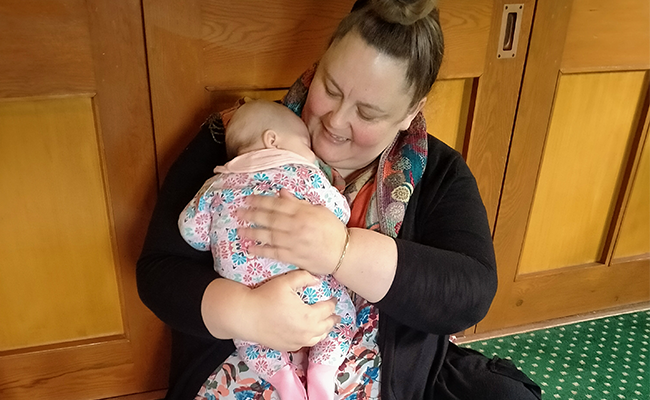 A mother who imagined better for disabled children in early childhood education (ECE) never expected her journey to becoming an early childhood teacher would end up with her getting a PhD as well.

Kate McAnelly recently had her PhD thesis “Expanding conceptions of the early childhood learning environment and autistic learners within it: A new materialist informed sensory ethnography” accepted and will graduate in August.

Kate says her interest in equity and inclusion-oriented research in the early childhood field arose from her son Stephen’s time in early childhood education, where he experienced multiple episodes of discrimination, marginalisation and exclusion.

“Stephen was essentially left to his own devices for much of the time, as he was considered to be an empty vessel incapable of learning.”

This is “unfortunately pretty typical of many disabled children’s experiences of ECE in Aotearoa New Zealand”, Kate says.

“This othering broke my heart. I had an alternative view of Stephen, one which centred on his competence, capabilities and innate potential.”

Her vision aligned with that of the national early childhood curriculum Te Whāriki.

The frustration and sadness that grew from this othering fuelled her decision to leave her life as a stay-at-home mum behind and enrol at the College of Education’s Southland campus in Invercargill to begin her journey to becoming an early childhood teacher.

She had not expected she would even complete her undergraduate degree, given the responsibilities she was juggling.

However, she not only managed that, but proceeded to challenge herself further by beginning postgraduate study at the same time as getting her teaching career underway.

She completed her Postgraduate Diploma in Teaching before moving on to a Master of Education.

Her Masters dissertation focused on how the members of a kindergarten community – children and adults alike – supported the active participation of a disabled child and their family.

Kate intended finishing her postgraduate study at the completion of her Master’s as “just getting to that point felt like a super unlikely bit of blue skies thinking to me”.

However, she found she still had a lot she wanted to say about disabled children’s experiences in Aotearoa New Zealand’s ECE settings.

“These aren’t always equitable, inclusive or mana enhancing as Te Whāriki promises all children and their families.”

She and her family relocated to Dunedin from Invercargill and she started her PhD in June 2017. Her supervisors were Dr Michael Gaffney and Professor Alex Gunn, whose “knowledge, experience, warmth, wisdom, advice and patience” Kate credits as critical to her success.

Kate found that people, spaces, objects and practices all had a critical role to play in co-constituting the early childhood learning environment.

These people, spaces, objects and practices acted on and upon one another to produce her focus children Sophia and Ralph’s (both pseudonyms) active participation and learning.

“The new materialist theoretical framing that underpinned my thesis describes people, spaces, objects and practices acting on and upon one another in this way as intra-activity.”

Nothing could ever be assumed to be true from one day to the next, Kate says, or even one moment to the next, as the agentic potentials of the people, spaces, objects and practices that co-constituted each learning environment were constantly in intra-active flux, and so were always shifting and changing the possibilities at play for Sophia and Ralph.

“I’d argue that my findings actually apply to the experiences of all children, and not just those in early childhood settings.

The agentic potentials of the “everyday stuff” within the early childhood learning environment, which Kate describes as the “more than human”, were particularly visible within moments of intra-activity that she documented. This challenges the traditional human-centricity of early childhood education provision, where human action is typically privileged. Kate argues that in turn, this has a variety of implications for inclusive teaching practice.

“It’s not well known or used as a framework to hang research on in Aotearoa New Zealand, but I was really keen to put it to work given autistic children are commonly sensitive to various sensory stimuli within the environments they’re a part of, and the affordances of sensory dimensions of the learning environment are acknowledged as playing such a critical role in supporting autistic children’s active participation and learning.

“I was able to note a variety of senses being produced within the intra-activity of people, spaces, objects and practices, beyond traditionally held notions of sight, sound, touch, taste and smell as being most important, that were then experienced and embodied by Sophia and Ralph.”

Kate found that the diverse modes of sensory meaning-making that emerged were critical to the ways in which each child was able to actively participate and learn. The role of senses, sensory meaning-making and sensory comfort in supporting children in early childhood settings to actively participate and learn hasn’t been talked about much beyond practice with infants and toddlers, who are rightfully acknowledged in the literature as inherently sensory beings.

However, Kate thinks older children, autistic and not, should be regarded as inherently sensory beings too, with learning needs that explicitly encompass the sensory. She’s excited for the dialogue that her thesis hopefully generates in that direction.

“I’d argue that my findings actually apply to the experiences of all children, and not just those in early childhood settings. What’s best for disabled children is best for all children. We know better, but we’re not always doing better. It’s long past time to put the rubber to the road and move inclusive education for all in Aotearoa New Zealand from rhetoric to reality.”