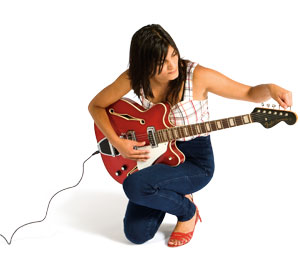 For musician Anji Sami, the great appeal of coming to Dunedin was that it was far away and she didn't know anything about it: “I thought it would be an adventure”.

Anji admits to having a romantic view of the city – “I hoped it would be really cold and I would write heaps of sad songs”.  So it was fitting that while completing a Bachelor of Music with contemporary endorsement (aka the rock degree) at Otago, she found herself swept up in a world of beautiful architecture and soulful evenings singing at a local cafe.

“It was a wonderful, close-knit musical community. Everyone was very open and warm and wanted you to do well”.

By day, Anji worked towards her degree, gaining skills in areas including songwriting, orchestration and performance guitar, while learning about music history and theory.

With her rock and roll background – Rock Quest and countless bands – Anji had a good knowledge of the world of popular music.  So the real treats of the degree, she says, came from unexpected directions. “Possibly my favourite paper was on the work of Bach.
I learned about tonal harmony and the rich theory that underpins classical music”.

After graduating, Anji spent two years working in the Department’s office while pursuing her solo music career. Her first EP, El Dorado, was recorded at the University’s Albany Street studio.

Now, back in Auckland, Anji’s continuing to live the dream. As one third of the family trio, the Sami Sisters, she has supported Rufus Wainwright, Don McGlashan and Kasey Chambers, performed at WOMAD and is recording an album. “It’s fantastic,” says Anji, who describes the band’s sound as “nostalgic/country/20’s, 40’s, 50’s girl group/80’s Morrissey/90’s spice girls fusion”.

“We’re creating fun, quirky music that we like, and are having a blast”.