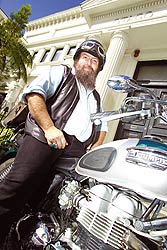 Pat Wheatley's life changed when the world's foremost living scholar on Alexander the Great, Professor Brian Bosworth of the University of Western Australia, took on the long-haired biker with a brain as his PhD student.

Growing up in the Canterbury high country, Pat was a farm kid who read Homer. After an OE in the 70s that included tracing Alexander the Great's path through Asia, he returned to university to study Classics, immersing himself in his passion for the ancient world.

That zeal lives on today in Pat's area of teaching expertise, Greek and Roman History with a speciality in the Alexander the Great period.

"The Alexander period is quite out-there, and very topical. He was charismatic and controversial-blazing his way across the globe to conquer the known world before dying at the age of 32 at the top of his game."

Wheatley teaches papers in Alexander the Great at 300 and 400-level, drawing heavily on the ancient sources. This means the more controversial aspects of Alexander's life and career are covered, including his personality and sexuality.

Pat follows in the footsteps of Jim Hamilton, a famous Alexander the Great scholar at Otago in the 1950s and 1960s, who wrote the seminal commentary on Plutarch's Life of Alexander in 1969, which is still in print.

And Pat's a strong advocate for Classics as a subject choice.

"With Classics you learn to write, to communicate, and to understand the roots of our society and culture."