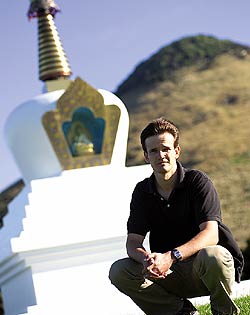 "There are a lot of myths surrounding Hinduism but it's not a freak show," he says.

And while many Western converts to Buddhism think it's all about meditation, most Buddhists, in fact, don't meditate. "It's not an outstanding feature of the religion - devotional practices are much more common."

Professor Sweetman joined the Department of Theology and Religion from a research fellowship in Germany. Before that, he had been teaching at Newcastle University, "a student community not unlike Otago's". The major difference to his teaching here is not having access to a "lively Hindu community" and being able to take students to visit a Hindu temple. Instead, Professor Sweetman incorporates plenty of audio-visual material into his lectures so students can experience some of the colour of this religion.

His particular interest is exploring Western perceptions of Asian religions from the 1500s to modern Hollywood films. "The colonial expansion into India, and the subsequent debates between Protestants and Catholics, for instance, about which religion was more like Hinduism, and therefore 'false' is what interested me initially."

A few years ago Sweetman spent a month in India reading ancient Tamil literature with both modern scholars and traditional Indian "pundits" or experts in this field. "These 80-year old guys have memorised vast chunks of this stuff - and their interpretations are absolutely bound by tradition." The works are 1500 to 2000 years old, and mostly love poetry - "the heroine's longing for the hero was later interpreted as the devotee's longing for god," he says.