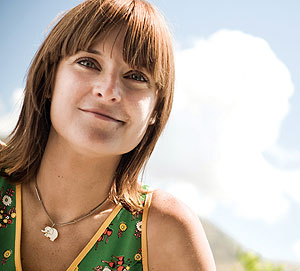 Petra McCallum says she has "always been fascinated by other cultures and how languages differ around the world". It's a fascination she's pursued across countries and continents - originally from Melbourne, she has lived in Ecuador, Spain and England.

So coming to Otago to undertake a degree in Language and Linguistics was a natural progression - and a perfect combination.

The qualification enabled Petra to become fluent in a language - Spanish - at the same time as studying how languages function - a process of reflection she describes as having been "really helpful".

"I became interested in understanding how humans can talk, how babies acquire language and how we can learn other languages."

Language is, of course, fundamentally about communication, and Petra says she enjoyed getting to know all her classmates in both Language and Linguistics classes. Meanwhile, the very practical Teaching English as a Second Language (TESOL) papers that she took in her degree were so appealing Petra is considering this as one of her possible careers.

She's spoilt for choice: "There's lots of translating work, especially on websites - that's already huge and growing." Or she might work with travel companies organising tours for Spanish speakers - perhaps in Queenstown.

If Petra stays in New Zealand, she "plans to learn a little more Māori language, perhaps an Asian language too". As she's already well aware, the world is a wide-open and beckoning place.