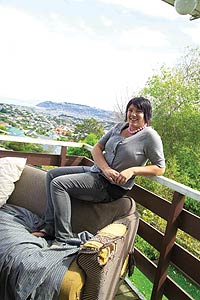 Teri Higgins' past year at Otago has been one big horror film - her major project was an honours dissertation on the "psychoanalytical failure of the remake of Psycho".

Fortunately, says Teri, "I love horrors!" She even made a low-budget horror movie at the age of 13, one of her many early forays into film-making.

Indeed, one of the great things about studying at Otago, says Teri, has been not only the chance to study films in class, but to get together with others outside of class and make them. She has been actively involved in the Otago University Students' Association's Mothra film-making competition (a student tradition named after a famously bad film about a giant moth).

The experience has brought her into contact with more film enthusiasts, and her latest project is writing a screen-play, Couch, the interwoven story of three university students as told via their outpourings to their therapists.

Meanwhile, Teri - the first member of her family ever to attend university, and who was awarded a First-in-Family scholarship which helped support her early years of study - is getting ready to begin her master's thesis.

Here she is focusing on women in action films - "not the aggressive Lara Kroft-types, but the passive women; the cops' wives, for example. They tend to play these very neutralising, down-to-earth, family-focused roles which will be really interesting to explore."